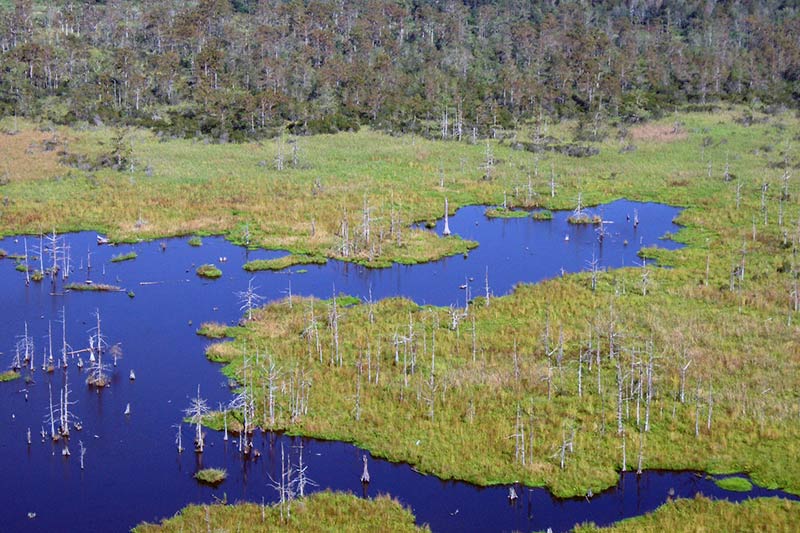 A swamp to marsh transition near Houma, Louisiana, where dead trees are most likely the result of saltwater intrusion. (Photo by Torbjörn E. Törnqvist)

Without major efforts to rebuild Louisiana’s wetlands, particularly in the westernmost part of the state, there is little chance that the coast will be able to withstand the accelerating rate of sea-level rise, a new Tulane University study concludes.

The study by researchers in Tulane’s Department of Earth and Environmental Sciences and published in the open-access journal Nature Communications shows that the rate of sea-level rise in the region over the past six to 10 years amounts to half an inch per year on average.

“In the Mississippi Delta, about 65 percent of study sites are probably still keeping pace, but in the westernmost part of coastal Louisiana, more than 60 percent of sites are on track to drown,” said Tulane geology professor Torbjörn E. Törnqvist, a co-author of the study.

"In the westernmost part of coastal Louisiana, more than 60 percent of sites are on track to drown."

Törnqvist conducted the research with lead author and PhD candidate Krista L. Jankowski and co-author Anjali M. Fernandes, a former postdoc in Törnqvist’s group who is now at the University of Connecticut.

The researchers used an unconventional method to measure sea-level change that integrated information from different data sources. They analyzed measurements of shallow subsidence rates at 274 sites across the coast and combined these with published GPS-measurements of deeper subsidence rates. Adding published satellite observations of the rise of the sea surface in the Gulf of Mexico, they were able to calculate how rapidly sea level is rising with respect to the coastal wetland surface.

“The bottom line is that in order to assess how dire the situation is in Louisiana, this new dataset is a huge step forward compared to anything we’ve done before,” Törnqvist said.

Justin Lawrence of the National Science Foundation, which provided funding for the study, agreed. “These researchers have developed a new method of evaluating whether coastal marshes in Louisiana will be submerged by rising sea levels,” Lawrence said. “The findings suggest that a large portion of coastal marshes in Louisiana are vulnerable to present-day sea-level rise. This work may provide an early indication of what is to occur in coastal regions around the world later this century.”

The research was made possible through publicly available data collected under the auspices of Louisiana’s Coastal Protection and Restoration Authority and the US Geological Survey.