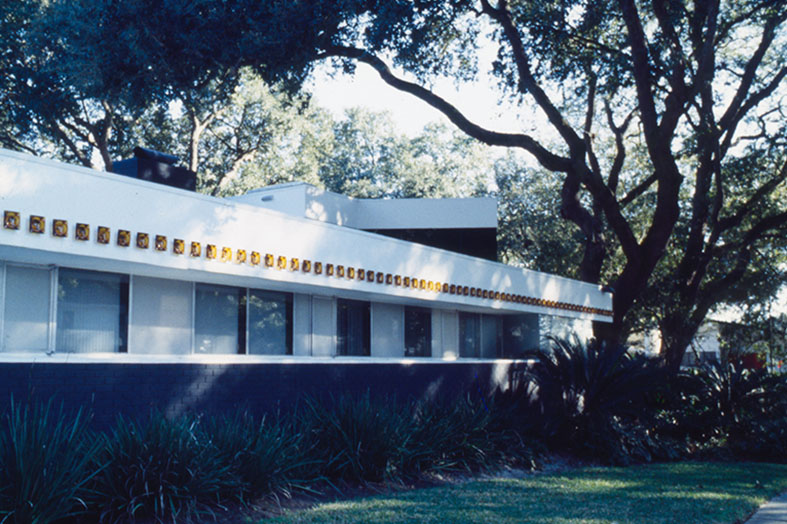 The Ashtray House, shown here circa 2001, remains a popular topic among architecture aficionados. The home is located in the Park Island neighborhood of New Orleans and is decorated with 1,200 amber glass ashtrays along the roof line. (Photo from the Southeastern Architectural Archive)

A well-known home designed by modernist architect and Tulane alumnus Albert Charles Ledner for Mr. and Mrs. A.C. Sunkel is a popular topic in discussions of quirky New Orleans architecture. The home— known as the “Ashtray House” or the “Sunkel Residence”— is recognizable by the 1,200 amber-colored glass ashtrays embedded into the exterior fascia.

The Ashtray House, along with drawings, photographs and other items from the records of Ledner, will be on display during a new exhibit at the Tulane University Southeastern Architectural Archive (SEAA) located in room 300 of Jones Hall on the uptown campus. The exhibit, “The Organic Modernism of Albert C. Ledner,” begins Aug. 17, 2017 and continues through June 8, 2018. Exhibit hours are 9 a.m.-noon and 1 p.m.-5 p.m. Monday through Friday.

“Back in 1962 when the home was built, this type of ashtray could be found everywhere from people’s homes to Denny’s restaurants,” said Kevin Williams, SEAA archivist and curator of the Ledner exhibit. “The Sunkels were avid smokers and the ashtrays were Ledner’s way of personalizing the home for its owners.”

“Back in 1962 when the home was built, this type of ashtray could be found everywhere from people’s homes to Denny’s restaurants.”

In recent years, the house made headlines again when its owner, former New Orleans Mayor C. Ray Nagin, listed the property for sale amidst allegations of corruption. The house was last sold in 2012.

Ledner’s exhibit will also feature his 1950s Unitarian Church and buildings for the National Maritime Union in New Orleans, New York and other cities throughout the United States.

An opening night reception, sponsored by the Louisiana Architectural Foundation and free to the public, will be held on Aug. 17 from 5 p.m.-8 p.m. This reception is a preliminary event to the 2017 Architecture & Design Film Festival taking place in New Orleans Aug. 24 -27, 2017. The documentary film, Designing Life: The Modernist Legacy of Albert C. Ledner, will premier at the festival on Aug. 25.