‘Julius Caesar’ has a modern twist and all-female cast 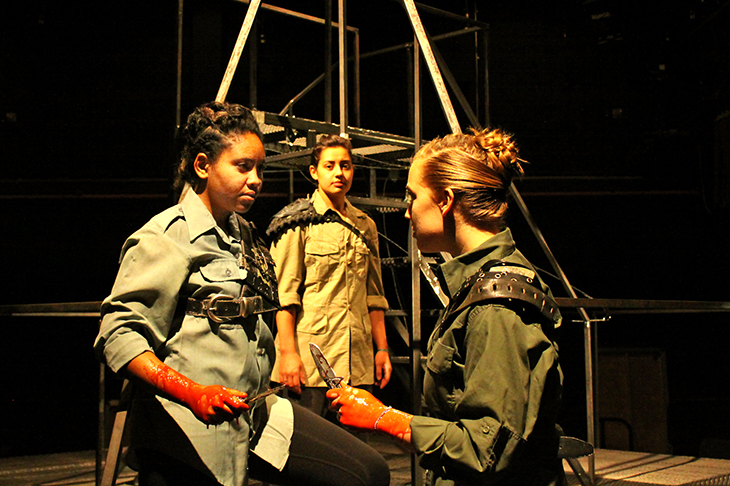 Rehearsing a scene from Julius Caesar at Tulane are undergraduates, from left, Keyara Milliner (Brutus), Tirol Palmer (Antony) and Audrey Catalano (Cassius). Performed in a contemporary setting, the production has an all-female cast of 20 undergraduates. (Photo by Marc Petros)

A contemporary setting and an all-female cast of 20 undergraduate students are giving an interesting modern spin on Shakespeare’s classic Julius Caesar, playing Tuesday (April 12) through Sunday (April 17) at the Lupin Theater on the Tulane University uptown campus.

The production, which concludes the season for the Department of Theatre and Dance, will be performed “in the round,” so the entire audience will have excellent views of the drama, said Ardice Cotter, production and operations manager for the department.

Directing the production is faculty guest artist Mel Cook, who is known for her multimedia work and has a background in Shakespearean productions.

Show times at the theater in the Dixon Hall Annex are at 8 p.m. on Tuesday through Saturday (April 12–16) and at 2 p.m. on Sunday (April 17). Admission is $10 for students, $12 for Tulane alumni and employees and $15 for adults. Check here for ticket information.

In May, The New Orleans Shakespeare Festival at Tulane University will feature Lisa Wolpe’s Shakespeare and the Alchemy of Gender. Wolpe is an internationally renowned Shakespearean actor who has played numerous male roles and who created a one-woman show based on her experiences.