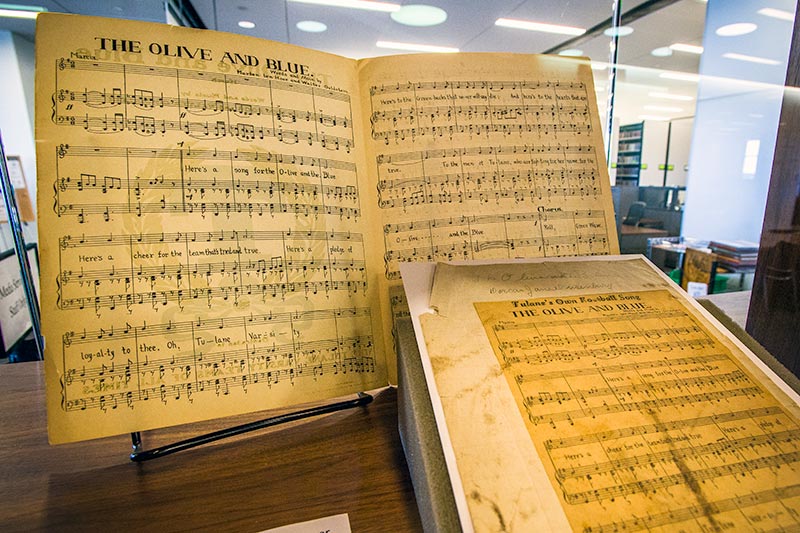 The new ‘Songs of Tulane’ exhibit at Howard-Tilton Memorial Library delves into the university’s unique history through the medium of music. (Photo by Ryan Rivet)

Early football cheers and Tulane pride songs from the late 20th century are featured in the new Songs of Tulane exhibit in the Howard-Tilton Memorial Library.

Comprised of materials from the music and microfilm collection housed within the university archives, the exhibit showcases original sheet music, albums and letters written by composers. The presentation also tells the story behind how the university chose its alma mater.

Lisa Hooper, head of media services at the library, collaborated with university archivist Ann Case to organize the new exhibit.

“Visitors can see how important song is for creating and sustaining school spirit.”

“Visitors can see how important song is for creating and sustaining school spirit,” said Hooper.

While some Tulane tunes, like 1928’s “Olive & Blue,” stood the test of time for Green Wave football fans, other compositions, like the “Tulane Tromp” created by alumni Robert Polack, Ruby Foster and Maurice Ries, were never fully embraced by the Tulane community.

The exhibit also displays items documenting the competition held by the Tulane Alumni Association in 1926 to select the university’s official alma mater.

After narrowing down submissions to two entries, the marching band performed both songs during a football game so students could vote for their favorite rendition.

“They had an executive committee, which made the final decision in February of 1927,” said Hooper.

The contest’s winner is the alma mater that we know today. Newcomb alumna Eva Joor Williams and William H. Ruebush won a cash prize for creating the work.

The song featured harmonies by The Fourlanians and music from the university band under the direction of John Morrissey.

The exhibit is located on the sixth floor of Howard-Tilton Memorial Library and will be on display throughout the fall semester.

Everything in its place
Tulane gets high marks in latest US News Best Colleges rankings
Students step up for a day of service
Hostile territory
Philanthropist, alumnus to lead seminar on race and health