The Tulane University Center for Inter-American Policy and Research (CIPR) will receive grants totaling $12.3 million to support the study of Latin America, including its relationship with the United States. The donation honors the late Samuel Zemurray Stone, a former Tulane board member and longtime supporter of the university's Latin American studies program. 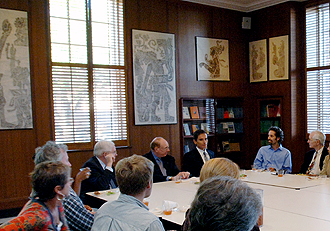 A seminar on contemporary issues of import to Latin America takes place on the Tulane uptown campus. The Center for Inter-American Policy and Research sponsors the seminar series. (Photo by Paula Burch-Celentano)

The recipient of the funding, CIPR, was established in 2007 through a partnership between the Stone Center for Latin American Studies at Tulane and the Centro de Investigacion y Adiestramiento PolÃ­tico Administrativo, a Costa Rican-based public policy think tank.

“This generous gift will enable us to enhance our focus on Latin America, an area where we have deep, historic ties as a city and a field of study in which we, as a university, have attained national recognition,” Tulane President Scott Cowen said.

The funding will advance the research promoted by Stone throughout his scholarly life. As a distinguished political scientist, author and historian, Stone lectured at universities throughout the world including the Sorbonne in Paris, where he received his doctorate.

The funding will provide one- and two-year postdoctoral fellowships solely devoted to research, said Tom Reese, executive director of the Stone Center. “A central concern of Dr. Stone's was that scholars be afforded, at some point in their careers, an opportunity to advance their research without other encumbrances on their time,” he said.

The funding will also support the CIPR's efforts to investigate critical policy issues and increase exchanges between scholars and decision-makers working in Latin America.

The organization, which holds a regular seminar series focusing on contemporary issues of importance to Latin America, is developing a collaborative network with similarly oriented research entities in different world regions and plans to convene international conferences, workshops and seminars as it has already done in Costa Rica and Washington, D.C.