It's more than three months away, but Green Wave baseball fans are counting the days until the start of baseball season, which will begin on Feb. 20, 2009, with a 15-game stand on the uptown campus at Greer Field at Turchin Stadium. 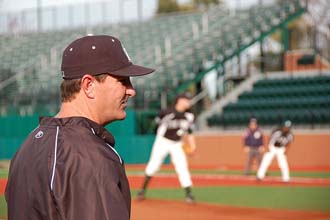 “It's a very challenging schedule,” says Green Wave head baseball coach Rick Jones of the competition ahead for Tulane. The season begins on Feb. 20, 2009. (Photo by Sally Asher)

The first pitch in the new season will take place at 6 p.m. on Feb. 20, when the Wave takes on LeMoyne College of Syracuse, N.Y. It will be the second season for Turchin Stadium, which was inaugurated on Feb. 23, 2008, after being rebuilt and expanded after Hurricane Katrina.

Headlining non-conference matchups, Tulane will face NCAA powerhouse UCâ“Irvine for a three-game set on the West Coast on March 13â“15, 2009. The Anteaters were 42-18 last year after falling to LSU in the Super Regionals of the 2008 NCAA Tournament.

“It's a very challenging schedule, one that I think if we perform well in, will help us a lot as far as RPI (ratings percentage index) and postseason opportunities,” Jones said.

“We play in one of the top five leagues in the country and a league that is getting better every year. I think this year will be the toughest this league has been since its inception,” Jones said. “It's a tremendously challenging league.”

Season tickets are available on-line or by calling the Tulane ticket office at 504-861-9283.