In 2005, flooding in downtown New Orleans after Hurricane Katrina forced the Tulane School of Medicine to relocate at the Baylor College of Medicine in Houston, and then Hurricane Rita delayed the start of medical school again. The students in the medical class of 2009 spent their entire first year of medical school in Texas before returning to New Orleans for their second year. On Saturday (May 16), they will become MDs. 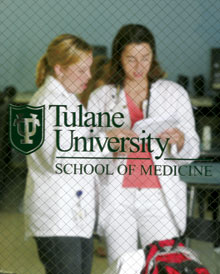 After spending their first year at the Baylor College of Medicine because of Hurricane Katrina, the medical class of 2009 looks forward to receiving MDs on Saturday (May 16). (Photo by John Everett)

“Once you go through an experience like this, you can go through anything. You learn flexibility, prioritization  what's important and what isn't,” says Dr. Marc Kahn, senior associate dean for admissions and student affairs in the School of Medicine. “When you put your mind to it, you can do amazing things. These guys went through a lot!”

In addition to the rigors of medical school, the Tulane students had to become accustomed to a new city. The Houston community offered housing, while the Baylor College of Medicine administration provided classroom space for Tulane faculty to teach their students, facilities for anatomical dissection, office space and even a Tulane student lounge.

A major law firm assisted with issues for students who had apartments they couldn't live in back in New Orleans, and the Baylor financial aid team worked with Tulane students in addition to their own.

After three major moves in a year, the medical students returned to New Orleans after 10 months in Texas in mid 2006 and plunged into helping the city rebuild by participating in both medical and non-medical projects.

Christopher Kroner served as class president for all four years. “Family medicine is very community-oriented and I wanted to practice it before Katrina,” Kroner says. “After Katrina, it reinforced for me how badly primary care is needed, and it made me firmly set on that path.” The resident of Chula Vista, Calif., is heading off to a residency program in family medicine at the University of Californiaâ“Los Angeles. 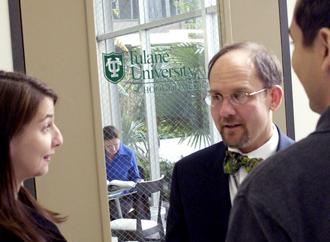 John Wysocki of Boston, president of the medical student government association, had expected to do his residency training in New England, but his post-Katrina experience has led him to sign on for an internal medicine residency in New Orleans.

“Katrina accelerated the problems the city has had with access to health care, and people are working fervently to come up with a solution for people to get the health care they need, without financially hindering the state,” Wysocki says.

“It's a movement  opening community and neighborhood healthcare centers  and a model that could energize a community.

“The vision of what health care here could be like here is remarkable. New Orleans has triumphed in a number of ways; it's got an infectious spirit. I'm extremely excited by what's on the horizon, and I want to be a part of that.”