"All the World"s a Stage," Says the Bard

The Shakespeare Festival at Tulane opens the second of three productions during its 2008 summer season with Shakespeare's As You Like It beginning tonight (June 26) with a half-price preview show at 7:30 p.m. in Lupin Theatre on the Tulane University uptown campus. 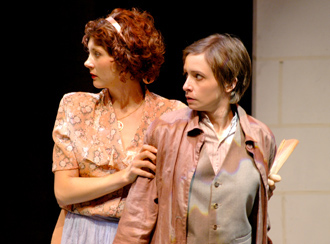 In a scene from As You Like It, Jennifer Mefford, left, as Celia and Trina Beck as Rosalind perform on the Lupin Theatre stage for the Shakespeare Festival at Tulane. (Photos by Brad Robbert)

Ron Gural, artistic director of the Shakespeare Festival, says that the shows are an opportunity for people to get out to the theater to experience Shakespeare's work the way it was intended.

“It's better to see Shakespeare live on stage instead of just reading it,” says Gural, who directed Taming of The Shrew, the festival's first production of the season. “I know some may disagree with me, but to see it on stage is really enjoyable and everyone should experience that.”

As You Like It features one of Shakespeare's most famous and oft-quoted lines, “All the world's a stage.”

As You Like It is directed by Sean Patterson and will carry on the season's “battle of the sexes” theme. Relationships, betrayal, comedy and cross-dressing characters are all ingredients in the recipe that makes this production a must-see, Gural says. 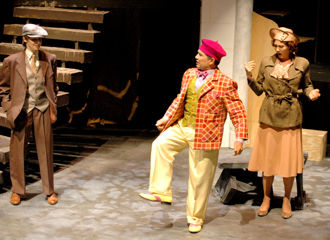 Continuing the Shakespeare Festival's summer theme of “battle of the sexes,” As You Like It includes this scene with, from left, Trina Beck as Rosalind, Lorenzo Gonzalez as Touchstone and Jennifer Mefford as Celia.

Following As You Like It will be Twelfth Night, a production by the All Things Shakespeare! internship program for high school students, which runs July 23â“26 at 7:30 p.m. on weekdays and at 1:30 p.m. and 7:30 p.m. on Saturday.

The All Things Shakespeare! summer intern program offers 9th through 12th grade students the opportunity to learn the inner workings of the theater including set building, house management and preparation as an actor, with instruction in voice, diction and movement.

The program culminates with a student-run production to showcase what they've learned.

The festival also will present a production on July 25â“26 and again on Aug. 1â“2 of What, Has This Thing Appeared Again Tonight?, an original play conceived by Jim Fitzmorris, the festival's associate artistic director. All shows will be held in McWilliams Hall Lab Theater.

For more information about upcoming performances or for ticket reservations, contact the Shakespeare Festival box office at 504-865-5105, extension 2.