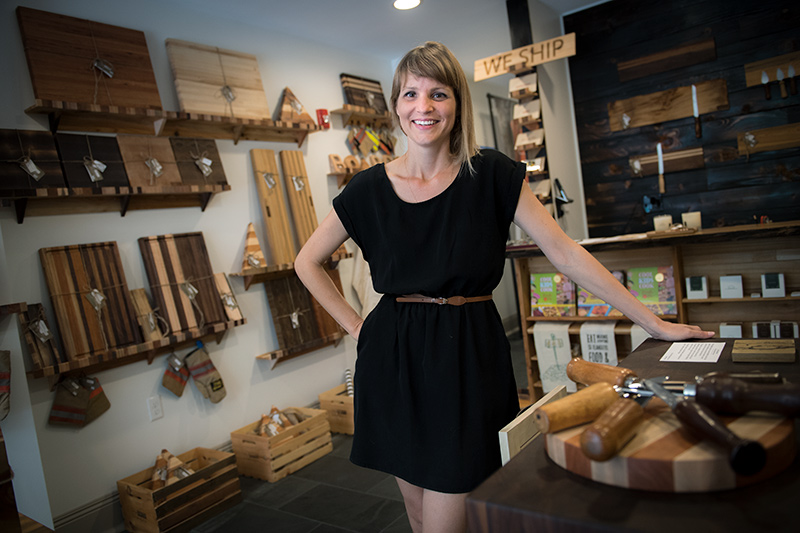 Tulane alumna Mandy Simpson points out the features of a walnut wood cheese board to an interested customer at her NOLA Boards boutique. The patron’s inquiry about shipping to Thailand is a first, but she replies with an enthusiastic, yes. The board is just one of many handcrafted kitchen and barware pieces that Simpson offers at her two shops.

“We call our products functional art, as they’re multi-purpose but also beautiful. We actually make the cutting boards double-sided so that customers can display them in their homes,” said Simpson, who received an undergraduate degree from Tulane in 2001 followed by a master’s degree in social work in 2009.

“We call our products functional art, as they’re multi-purpose but also beautiful.”

For seven years, she worked as a social worker with heart transplant patients at Ochsner Medical Center before starting the business with Sumrow, who heads the New Orleans Woodworking company.

In 2014, a friend requested Sumrow to make him a cutting board as a wedding gift, which he created from wood recycled from other projects.

“It came out so pretty that I posted it on social media, and we started to get requests to make more boards. That’s how NOLA Boards started,” she said.

To address growing demand, the duo opened their first retail space on Magazine Street in 2016 and assembled a team of craftsmen to create the products in a 5000 square foot warehouse located in the Ninth Ward.

In July, Simpson and Sumrow opened a second location in the former Historic Annex of Jackson Brewery in the French Quarter. Both stores feature works from local artisans, including jewelry and glassware, alongside NOLA Board’s signature selection of kitchenware.

NOLA Boards boutiques are located in uptown New Orleans at 4304 Magazine Street and in the French Quarter at 519 Wilkinson Street.