Alumna’s market is a locavore’s delight 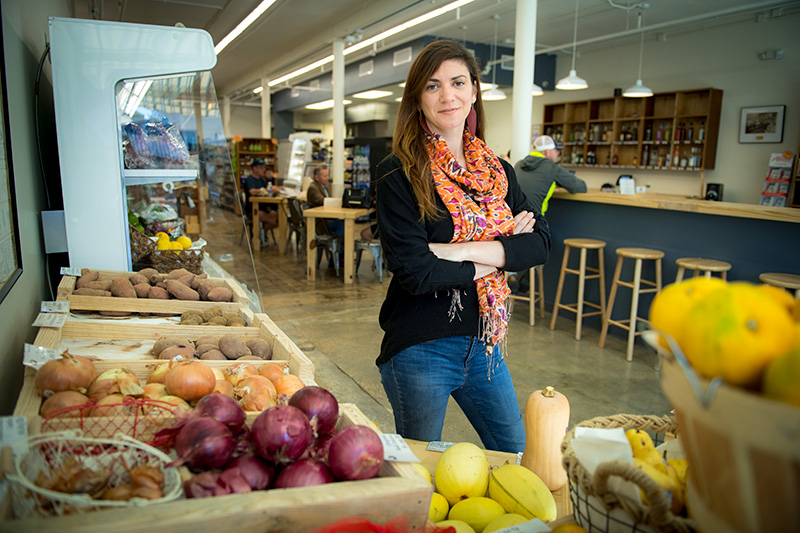 You can tell from the moment you walk in the door that Simone’s Market in New Orleans isn’t like most grocery stores.

There are no shrink-wrapped tomatoes or signs promoting national brands. Instead, you’re greeted by produce cases proudly describing the local provenance of their contents — satsumas from Belle Chasse, carrots and beets from Tangipahoa Parish, lettuce from Amite, and baby kale and arugula from Folsom.

“If it’s available locally, we totally carry it.”

In the back are refrigerator cases filled with ready-to-go meals made from ingredients like free-range chickens and grass-fed beef from New Iberia.

The brainchild of Simone Reggie, an alumna of the A. B. Freeman School of Business, Simone’s Market is an old-fashioned neighborhood grocery store with a special emphasis on local and regionally sourced food. While the Oak Street store features more than just local items — customers can always find pantry staples and non-indigenous essentials like avocados, bananas and spinach — Reggie takes special pride in showcasing the area’s growing number of farmers and artisan food producers.

“If it’s available locally,” Reggie says, “we totally carry it.”

Since its opening in January, Simone’s Market has attracted a following of regulars who enjoy the luxury of a neighborhood grocery store as well as the convenience of restaurant-quality prepared foods like lamb-neck shepherd’s pie, Gouda mac and cheese, and Scotch egg — a soft-boiled farm egg encased in sausage, coated with panko and deep-fried.

But don’t let the fancy prepared foods and artisanal creations fool you. While they might conjure up images of another market, one often associated with spending your whole paycheck, Reggie says value-minded shoppers can still support local farmers and food makers without breaking the bank.

“The other night I made a piece of drum, a huge salad and sliced sautéed vegetables — a full meal for two people — and I spent about $20 on ingredients,” Reggie says. “If you shop for basic ingredients, it’s super affordable.”