For more than a century, members of the Tulane Alumni Association have worn green and thought green. Now they're going to show they have green thumbs, too. On Saturday (March 28), hundreds of Tulane alumni in 25 cities will take part in “Wave of Green,” an effort to plant more than 1,000 trees in communities across America. 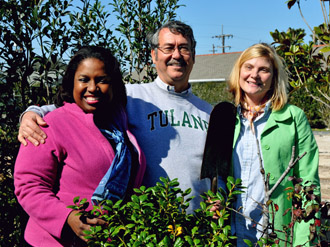 Trees and shrubs will be planted at Habitat for Humanity homes, community centers and parks in neighborhoods from Boston to Las Vegas to Tulane's hometown of New Orleans and all points in-between. The cities where the plantings will take place are those in which the association has established clubs to organize alumni activities.

“This is an opportunity to bring Tulane alumni together from across the country in a concerted, lasting and meaningful act of service. The trees we plant March 28 will serve as living testament to the Tulane spirit and how we have taken root around the country,” says Thomas Lee, a 1976 graduate of Tulane and one of the “Wave of Green” organizers. “This is also a great opportunity for Tulane graduates to reconnect and for those who have not previously taken part in Green Wave alumni events to join us.”

Adds Charlotte Travieso, director of the Office of Alumni Affairs and executive director of the Tulane Alumni Association, “The power of this project is that, as with the Evening of Distinction in 2005, we have many alumni coming together at the same time and doing the same thing, in Tulane's name, in cities all across the country. When I was just out in California, the Orange County alumni club president, Tom Lee, took me on a drive to show me the site at Boys' Town where our alumni there would be planting trees on the 28th.”

“Planting even one tree helps lessen our community's carbon footprint,” says Robert Freeland, who graduated from Tulane in 1976 and serves as the New Orleans alumni club president.

Volunteers opting for the East Jefferson High and Tulane projects will be assigned on a first-come basis. Once the quotas are met, all other volunteers will be assigned to the St. Claude project. Volunteers signing up will receive specific information on the nature and mission of each project.

To participate, go to the Wave of Green website to choose the city in which you'd like to participate or sponsor trees at $20 each.