Astronaut Doug Hurley, the first Tulane alumnus to travel in space, quietly acknowledged that fact by bringing a Tulane flag aboard the space shuttle Endeavour, which returned from the International Space Station on July 31. 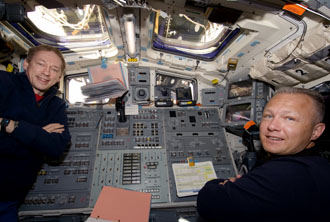 "Being a Tulane graduate and, as far as I know, being the only one who has gone into outer space, I figured it was worth doing," said Hurley, who piloted the mission. Astronauts aboard NASA spacecrafts have a tradition of carrying along items of sentimental value.

"On shuttle flights we are allowed to fly a number of items from organizations that we feel strongly about," said Hurley, a 1988 graduate of the Tulane School of Engineering who attended the university on a Navy ROTC scholarship.

Due to the limited amount of space on board, such items must be compact and are placed in a storage unit behind the walls of the shuttle.

The 16-day operation was the 29th shuttle mission to the space station and the 23rd for the Endeavour. Mission objectives included transferring personnel to and from the station, as well as bringing modules to be used in forthcoming experiments by station scientists.

Having trained 18 months for the mission, Hurley says he felt both excited and prepared for blast off, which took place in mid-July. His reward for spending much of the preceding year away from home in training was getting to go were only few have been.

"A lot of it was indescribable," said Hurley. "Not many people get to see the planet from above. It's an amazing place where we live, and I hope we can take care of it."

Following a vigorous public relations tour across the United States and Japan, Hurley says he plans to visit New Orleans and personally deliver the flag to the university.