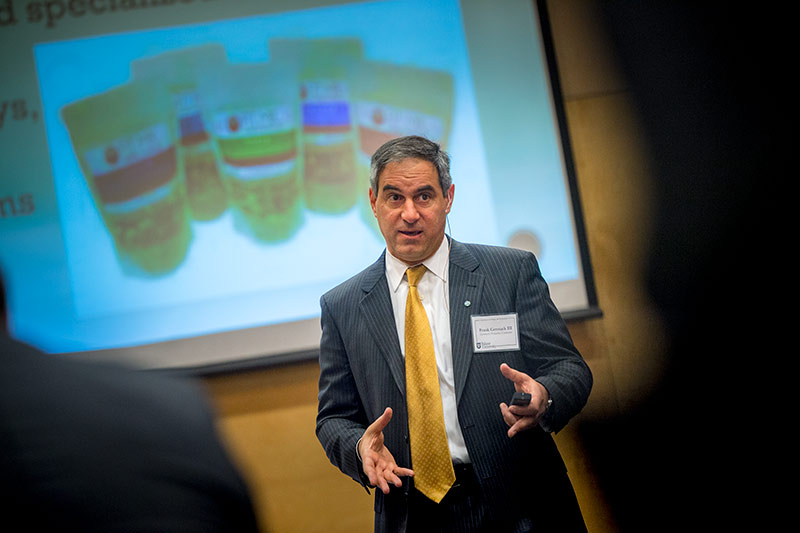 You might think you’d have to be nuts to try to compete with Frito-Lay, but in a presentation hosted by the Tulane Family Business Center on Friday, Jan. 27, the co-owner of Germack Pistachio Co. said the snack food business is actually a very good business to be in.

“[The snack foods industry] is growing at 3.5 to 4 percent per year, and it’s also very profitable,” said Frank Germack III, a Tulane alumnus and third-generation co-owner of the company. “For PepsiCo, Frito-Lay is 20 percent of total global sales, but it represents 35 percent of profitability, so they make a lot of money in snacks.”

Headquartered in Detroit, Germack Pistachio is the oldest pistachio roasting company in the U.S. It was founded in 1924 by Germack’s grandfather, an Armenian immigrant who saw a growing market for the exotic nuts he imported from Turkey. The company later became the first to dye its pistachios red, an innovation originally intended to hide the natural discoloration of pistachio shells.

“Empowering the members of the family business and making them feel that they’ve got some room to move up in the organization is key.”

Today, the company roasts a full line of nuts, seeds and coffees and produces a variety of dried fruits, chocolates, candies and snack mixes. The company sells its products in supermarkets, at professional sports events in Detroit and at its retail store in the Eastern Market district of Detroit.

While Germack and his sister co-own the company, neither works for the business; Germack’s full-time job is as director of the investment department at Rehmann Financial, a subsidiary of one of the nation’s largest CPA firms. Balancing a career and a family business requires commitment, but Germack said it also has its advantages.

“The biggest benefit is that the staff is empowered because they’re not limited by a family member being there saying, ‘It’s my way or that’s it,’” Germack said. “Empowering the members of the family business and making them feel that they’ve got some room to move up in the organization is key.”

Operated under the auspices of the Freeman School's Albert Lepage Center for Entrepreneurship and Innovation, the Tulane Family Business Center assists family-owned enterprises with the unique issues and challenges they face in running a family business.

“Family business enterprises are an integral part of the U.S. economy, and Germack Pistachios is an outstanding family business,” said Freeman School Dean Ira Solomon. “I’m delighted that Frank was able to come and share his story with us.”