Anatomy of a Financial Crisis

Even as the current financial bailout is pumping billions of dollars into the financial system, it is looking more likely that not only is a recession coming, but it will be longer and more severe than some experts predicted. Solving the crisis will be the focus of the new presidential administration, but looking back to assess the factors that caused it also is important, says Michael Bernstein, Tulane's provost and an economic historian. 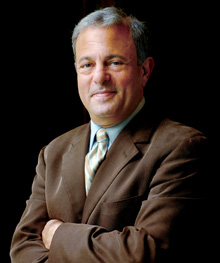 An economic historian and provost of Tulane University, Michael Bernstein underscores the importance of looking back at the factors that caused the nation's current financial problems. (Photo by Paula Burch-Celentano)

“The current financial crisis was a perfect storm that has been percolating for decades in the U.S. economy,” Bernstein says. “That perfect storm specifically involves the emergence of mortgage-backed securities as major financial products, and the increasing use of derivatives and other exotic products for investment.”

Bernstein says that the easiest way to understand mortgage-backed securities is to think of them as mortgages that are bundled together and sold like stock.

“The bundle of mortgages is the functional equivalent of a company that is generating a return,” Bernstein says. “If the company does well you get a return, if the company doesn't do well, you get less of a return.”

That scenario becomes more complicated, however, when good mortgages are bundled along with bad ones and then those bundles are broken down even further, muddying the waters of risk for potential investors. Though the practice was unwise, it wasn't devastating until the housing boom began to slow.

“People had no idea what they bought because it is all mixed together, good and bad,” Bernstein says. “So the minute prices start to soften up, all I can do is rush to (sell). That's what these down-market cycles have been about.”

Contributing to the meltdown is the use of complicated investment tools called derivatives, which reduce the risk associated with certain investments by deriving their value from underlying assets. Companies sold these derivatives, called credit default swaps, to offset the risk that the housing boom could falter.

“They were regarded as insurance policies, but they weren't insurance, they were gambles,” says Bernstein, who uses the analogy with life insurance to illustrate the role derivatives played in the crisis.

“Insuranceâ¦ is usually premised on an actuarial risk, a projection of risk over time. Then a product is sold to insure that risk. But when you die, it doesn't affect the risk of the other policies. Your death doesn't mean that anyone else is going to die any sooner. Not so with derivatives. When one instrument starts to falter, that's going to affect the price of the next instrument, and the next instrument, and so on.”

Bernstein is disinclined to join in the vilification of the Wall Street companies he calls “financial behemoths.” While he acknowledges their role, he says they were just following their mandate to make money.

According to Bernstein, the origin of this perfect financial storm can be traced back into the Carter administration, during which moves to deregulate financial markets gained momentum and Congress passed the Community Development Act, which some say led to risky lending by encouraging institutions to help meet the credit needs of low- and moderate-income neighborhoods.

“What started in the Carter administration and accelerated in subsequent administrations about national housing policy is one of the best-kept secrets of the story,” Bernstein says. “It all loops back to the fact that housing is regarded as the great talisman of economic achievement â¦ without addressing the income problem.”

Bernstein is passionate in offering an alternative philosophy even as he admits that he may be biased as a university administrator.

“I think we should be investing in real things like sending kids to college, developing new stem cell technologies, developing the next generation of computers,” Bernstein says. “You get returns  multiplied returns. That to my mind is the real dynamic behind all of this. We have underinvested in that since the '80s or even before that."