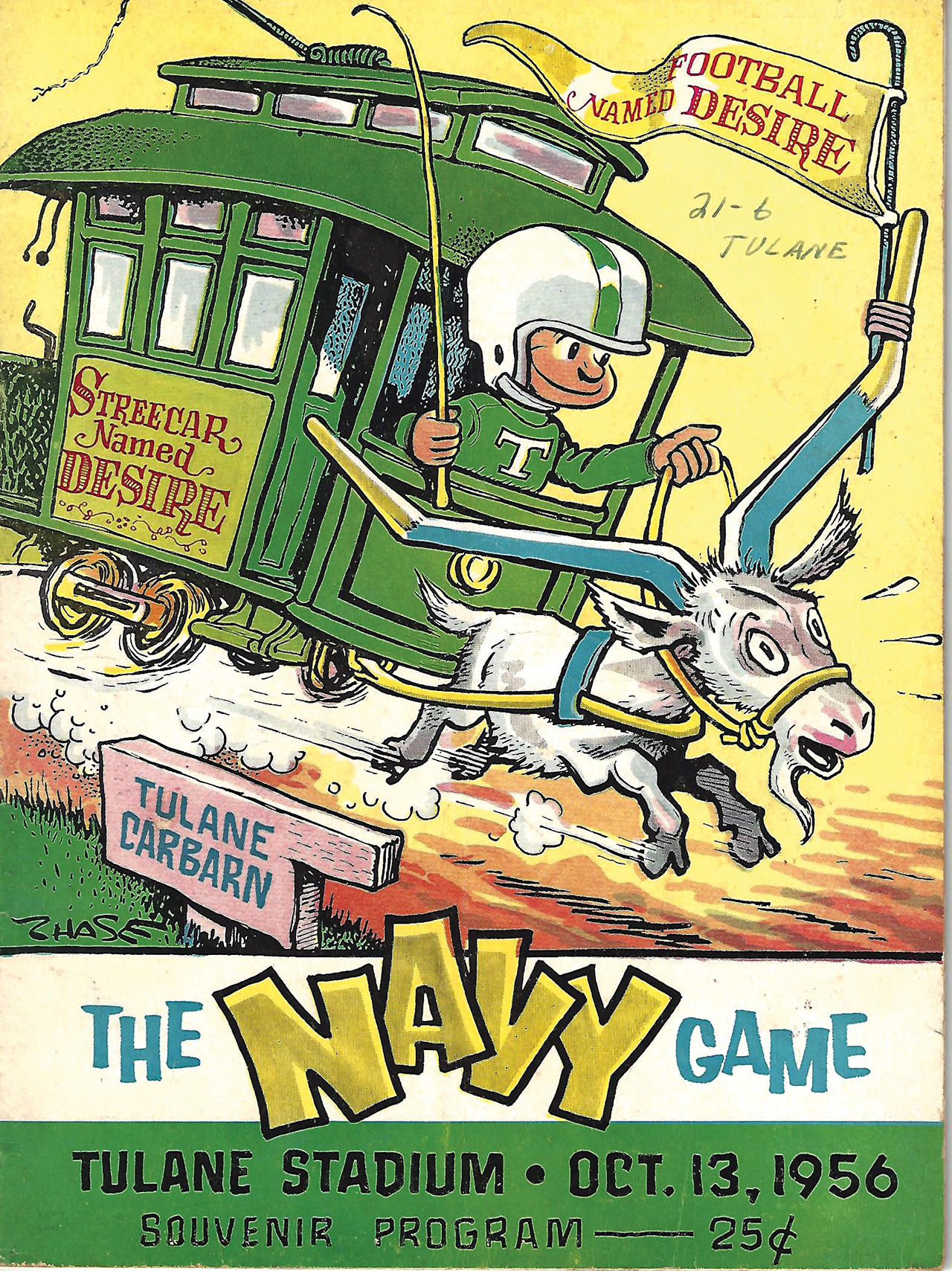 Angus Lind kept his original football program from the first time he attended the Tulane-Navy matchup in New Orleans in 1956.

It was “Wheels up!”—not “Anchors aweigh!”—as we headed to Annapolis, Maryland, last October for Navy’s homecoming game against Tulane. After a short ride from Baltimore to our rented house conveniently located a pitching wedge from both the alluring Annapolis Historic District and waterfront and the awe-inspiring U.S. Naval Academy, we headed to the epicenter—McGarvey’s Saloon.

My wife and I traveled with two New Orleans couples, all good friends. One husband was Rick Navarro, a 1974 Naval Academy graduate who flew a P-3 maritime surveillance aircraft on three different deployments to the Far East and had a lengthy career as a Delta Air Lines pilot. Nothing like having an insider tour guide.

Here’s the message: Put Annapolis on your bucket list for a Tulane game weekend.

Annapolis had long been high on my bucket list, and I always thought a Tulane-Navy rivalry would be terrific. I had first seen Navy play Tulane in New Orleans in 1956, when I was 12, and more recently have followed the Middies because of Rick. Both schools have storied football history, and with Navy coming into the American Athletic Conference in 2015, the timing was perfect. Not to mention that Navy comes to Yulman Stadium this fall  and their athletic director is former Tulane AD Chet Gladchuk Jr.

On Friday night McGarvey’s was crowded and noisy. At one point, someone called my name, but the voice was not familiar. I searched the faces and was surprised to see a fellow Orleanian who had graduated from Tulane with me in 1966—Hank Corder.

Corder attended Tulane on a Navy ROTC scholarship and played golf for the Wave along with the likes of Wally Blessey, Ray Fontenot and Steve Bellaire, among others. A surface-warfare officer, he was stationed on two destroyers during his five years in the U.S. Navy. His ships were deployed overseas, including once to Vietnam. We learned Hank—retired from his career in investments—and his wife, Porter, were frequent visitors to Annapolis.

Why? Daughter Sarah Corder played volleyball for Duke. After she graduated, she moved to Washington, D.C., to get a job. On a double blind date with midshipmen, she met her future husband, Mike Heary, who was not her date that night. Heary, it turns out, was a 6-foot-5-inch All-Conference point guard for Navy basketball teams. They were married in New Orleans; he served his five years’ active duty. They began a family in Annapolis and, away from his full-time job, for the last seven years he has been the color commentator for the Navy basketball broadcast team. The Corders visit regularly to see their three grandchildren and Navy football.

By the end of the night, Heary, a gregarious, funny guy, had invited our party of six to their tailgate the next day.

Earlier Friday, tour guide Navarro had led us to the visually stunning 338-acre campus for a tour of Bancroft Hall and the viewing of the traditional Friday dress parade and pass in review on the parade grounds. Watching the seemingly never-ending companies of spit-polished midshipmen emerge from Bancroft Hall —the largest single dormitory in the world—and march in lockstep to the parade grounds, along with the Naval Academy Band and the academy’s Drum & Bugle Corps with bagpipes, was impressive. Classes from 50 and 60 years ago looked on.

The next day, these future Navy and Marine Corps officers—4,000 strong—marched into Navy-Marine Corps Memorial Stadium and formed up on the football field where they sang songs (“Anchors Aweigh”) and led cheers—part of the pregame spectacle for homecoming and all home games. Then the Navy Glee Club sang “The Star-Spangled Banner,” finishing as fighter planes flew overhead.

“The pageantry is so impressive. If you don’t feel patriotic watching that, then you don’t have a red, white and blue bone in your body,” said Corder. Inside the stadium, there are no displays of names, teams or retired numbers. Instead, famous battles—Guadalcanal, Midway, Iwo Jima, Bataan, Saipan, Corregidor. When Lou Holtz brought his Notre Dame team there, he is credited with saying: “Wow! Navy plays a tough schedule.”

We indeed tailgated with the Heary crowd, who earlier had driven their cars into the lot in formation, with the car in the middle armed with music for the day, flanked by others with food, drink, cookout gear, tables and chairs. We were served red beans and rice, jambalaya and muffulettas, a nice touch for the visitors from Tulane.

Tailgaters completely circle the stadium, which seats around 34,000 and has superb sightlines. Watching the freshmen dash from the stands to the end zone where they do pushups after every Navy score is highly anticipated. Thirty points means 30 pushups.

Here’s the message: Put Annapolis on your bucket list for a Tulane game weekend. On the banks of the Severn River, it’s an incredible experience. “Annapolis is absolutely enchanting,” said Corder. “It draws you in. It’s a comfortable, cozy place to be with quality bars and great oysters and seafood—the same characteristics New Orleans has.”

This column originally appeared in the September 2016 issue of Tulane magazine.