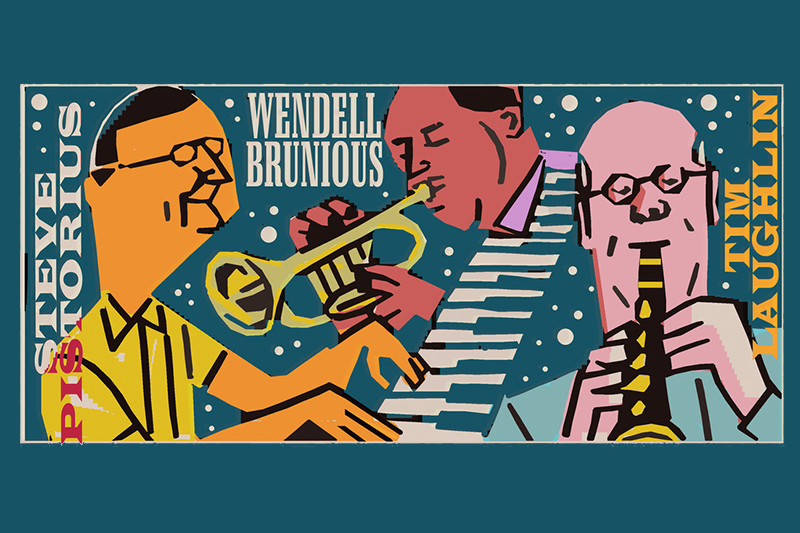 In a new New Orleans trend, musicians host concerts in their own homes. (Mark Andresen illustration)

Imagine these three musical giants in your house giving a private concert for you and 30 to 50 of your friends: Clarinetist Tim Laughlin, the heir to Pete Fountain’s golden tones; jazz trumpeter and vocalist Wendell Brunious, who fronted the Preservation Hall Jazz Band for 23 years; and ragtime/jazz pianist Steve Pistorius, a Jelly Roll Morton disciple. Now imagine the three New Orleans natives all swapping stories, cracking jokes and talking about every song they played.

Well, right before the holidays began, that trio brought the house down at a “salon concert”—also known as a “house concert”—for 50 guests in the lovely French Quarter home of Tim and Juliet Laughlin.

As the show began the tone was quickly set by the musicians’ banter. Host Laughlin introduced Brunious, who has deep roots in the Seventh Ward’s tight Creole community, as “one of the finest trumpet players in this universe.” Pistorius quickly added that he was a pretty good singer also.

“I’m the best singer since the sewing machine,” said Brunious.

“I’m the best singer since the sewing machine.”

The first song he played and sang was “Some of These Days.” He explained that the song was recorded by the “Last of the Red Hot Mamas,” risqué entertainer Sophie Tucker.

After the applause died down, Brunious looked over at the piano player and said, “It’s so easy to play when you know someone’s got your back.” He said he was blessed to have met some of the industry’s giants like Fountain, Fats Domino, Allen Toussaint and Louis Armstrong. He then launched into what he said was Armstrong’s version of Edith Piaf’s “La Vie en Rose,” played with a muted trumpet.

On a beautiful, cool, sunny day with the tall windows open at Laughlin’s house, you wondered what people down on the street thought as they heard world-class music wafting down from the second story.

Brunious followed with Morton’s “Sweet Substitute,” which featured Pistorius. After Louis Prima’s “Jump Jive an’ Wail,” Pistorius said Brunious “knows the correct lyrics and chords to every song. He makes it look like we’ve been practicing for six months. He makes an ordinary thing an event.”

Which is exactly what Laughlin, who would join them later, wants. New Orleans, unfortunately, mostly has used music as “wallpaper, not to be featured,” said Laughlin. “Sure, musicians were hired, but parties were still what musicians call ‘a hang.’” People talk and laugh during the music. Bars are not music venues either. But with house concerts, you are witness to a special event. The emphasis is on music.

No doubt house concerts are catching on. Because as Laughlin says, “You are members of a select few, hearing world-class musicians you only used to glance at. It’s not something you can just pop in and out of.” So once that privilege is explained, people from New Orleans throw money at the idea of a private house concert. And the musicians enjoy an appreciative, attentive audience.

Guests are encouraged to bring small plates, making it a potluck affair. It’s cozy, warm and fuzzy. “People like to show off their cooking,” Laughlin said. “New Orleans is all about fun, and it becomes a participatory, fun event.”

“It’s an informal, intimate musical experience without the hassles of going to a nightclub,” said New Orleans Advocate music critic Keith Spera. “And if musicians are hosting themselves, it’s a way to potentially make decent money without leaving home.” But no doubt many in attendance were likely trying to figure out how they could host one.

Laughlin dedicated this particular concert to the memory of Allen Toussaint, chef Paul Prudhomme and a very special friend and neighbor of his, Dr. Norman E. McSwain Jr., professor of surgery at Tulane University School of Medicine and trauma director of Charity Hospital of New Orleans, as well as surgeon for the New Orleans Police Department (see “Tribute” in the December 2015 issue of Tulane). “This was the only concert he hasn’t attended,” said Laughlin, who has now hosted four.

When Brunious was a youngster and his dad, trumpeter John “Picket” Brunious Sr., was playing with Pete Fountain, Fountain called him onstage and surprised him with a brand new trumpet. “That changed my life,” said Brunious.

And the stories kept coming. Before the trio played Pete Fountain’s song from his first gold record, “Just a Closer Walk With Thee,” Laughlin pointed out that the clarinet that he was playing—named “Ol’ Betsy”—also had been given to him by Fountain, who had used it to record that famous song.

In the audience that Sunday was Benny Harrell, Fountain’s son-in-law and manager. As the last rousing notes of “When the Saints Go Marching In” ended, Harrell said, “It’s a magical New Orleans moment. These guys are in a league of their own.”