Any Given Block, Any Given Year

When people stroll through the streets of the French Quarter, it's safe to assume they realize there is history in the buildings that line the thoroughfares, but many passersby probably don't know what that history is. Emily Clark, associate professor of history, is trying to bring the past to the forefront for students in the honors colloquium course, “New Orleans: Social and Material Fabric.” 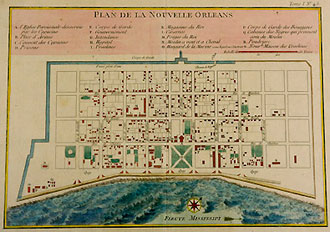 This 1845 copy of a 1724 map of New Orleans by cartographer De Pauger shows the Vieux CarrÃ© during the time period of study in an honors colloquium course. (Maps courtesy of the Louisiana Collection, Howard-Tilton Memorial Library, Tulane University)

Clark's students are using the Vieux CarrÃ© Survey compiled by Tulane architecture students in the 1960s as a primary source of information. The survey is an index of every property in the French Quarter, tracing the chain of title of the properties back as far as 1721.

“What's interesting to me, as a historian, about the Vieux CarrÃ© survey is that you can run the chain of title back. You can see who owned any piece of property in the French Quarter back to the beginning,” Clark says.

“The reason that's so interesting to a historian is that if you put it together with other sources, like sacramental records  records of baptisms and marriages, funerals, and court records, census records  you can begin to make a picture in your mind of what it was like to live on any given block in any given year.”

Clark says she has been familiar with the Vieux CarrÃ© Survey for years and has used it in her own research. The survey is an effective way to introduce students to historical research while getting away from secondary sources and immersing them in a living history. 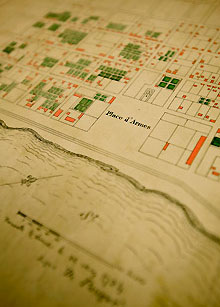 “I thought it would be really great to use this, to pick a year and do a social geography of New Orleans in great detail,” Clarks says. “You can learn a lot about race relations, gender relations and all kinds of things that you don't really get from narrative sources.”

The students' assignment is to do portraits of facing sides of two blocks in the French Quarter in a given year, finding out everything they can about the blocks.

“They will use whatever fulcrum of analysis they choose,” says Clark, “whatever they are interested in: language, race, disease.”

Clark says she wants to make the students' projects accessible to the general public, so each student will present their projects online, as part of a wiki or Internet website.

“Each student will produce their own page on the wiki that has their block portrait on it,” says Clark. “They can upload any kind of graphic, video or music. Their imagination is the only limit on this. It's very hands-on, very experientially driven.”

Clark hopes the course will light a fire of inspiration in her students and give them a sense of the excitement of actually “doing history” and getting to know New Orleans better.

“They'll get to know the city better. Their ideas about the city, I hope, will be complicated. Not just enriched, but complicated.”