Art From the Grooviest Decade

Similar to the period so eloquently captured in the opening paragraph of Charles Dickens' The Tale of Two Cities, the 1960s were the best of times and the worst of times  a decade so complicated by polarizing events and attitudes that it presents the possibility of fresh insight and understanding every time we look back at it. In his “Revising the 1960s” course, Michael Plante examines the art and culture of that grooviest of times. 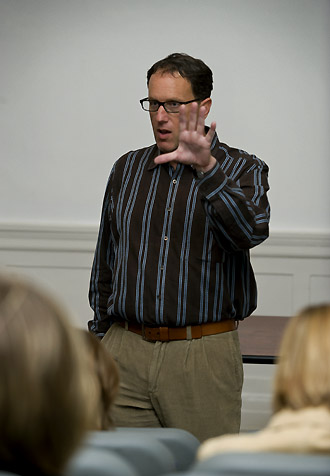 Lecturing to his class, Michael Plante discusses the art and culture of the 1960s. He is an associate professor of art history and holds the Jessie J. Poesch Professorship. (Photo by Paula Burch-Celentano)

An associate professor of art history and holder of the Jessie J. Poesch Professorship, Plante says, “Most art histories are written 20 years out, and then you get a second set that are 40 to 50 years out.”

Historical perspective invariably changes, and that is significant for art produced during the 1960s, a decade in which the sexual behavior, idealized politics, music, war and domestic conflict provided more than a backdrop to art movements such as pop and minimalism: the social upheaval became an integral part of the artistic process.

This is particularly true, says Plante, for pop art, perhaps the most defining movement of the decade by artists such as Andy Warhol and Robert Indiana. “A lot of the art of the time was absolutely dependent on mass media and popular culture,” he says. “Nothing could be more immediate to the formation of that art's subject matter than rock 'n' roll, the Kennedy administration and the development of the birth control pill.”

It was a time when traditional barriers were breaking down.

“You had people like John-Paul Sartre being interviewed by Playboy,” says Plante, “and then you would have Life magazine covering Jackson Pollock. Low culture was aspiring to high culture and high culture was moving to low culture. Those categories became very sticky and almost irrelevant.”

Today's students are now two generations removed from the 1960s, and many have confused notions about the decade. “Most things students think what happened in the '60s actually happened in the '70s,” says Plante. “They think feminism was really a big issue of the '60s and it wasn't. It was definitely postâ“Summer of Love.”

Plante brings the decade back to life through readings and class discussion. Although historical perspectives may shift over time, the contemporary criticism does not, so students read a good bit written by critics of the day such as Susan Sontag. “A lot of her firsthand accounts of pop art, of happening art and happenings  which are very theatrical art performances  still matter very much,” Plante says.

“That's in every class  I don't care what I'm teaching,” he says. “I want students to question the assumptions they bring to any material  whether it is contemporary or historical  and learn how to think through what historians and critics say about it.”