Though he has only logged a total of six days in New Orleans, Mohsin Hamid, author of The Reluctant Fundamentalist, seems comfortable in the Big Easy. Hamid came to campus on Monday (Sept. 15) to speak as a part of the Tulane Reading Project, which aims to create a shared intellectual experience for the entering first-year class through the reading and discussion of a selected book. 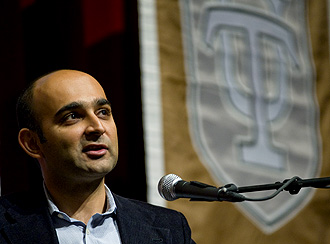 Comparing New Orleans to his hometown of Lahore, Pakistan, author Mohsin Hamid speaks to first-year students at Tulane about his novel, The Reluctant Fundamentalist, this year's book for the Tulane Reading Project. (Photo by Paula Burch-Celentano)

Hamid's second novel, The Reluctant Fundamentalist, is the first work of fiction chosen for the Reading Project. It is a book that the author hopes will leave readers “pondering themes of national identity and prejudice, American hubris and the immigrant experience in the post-9/11 world.”

Speaking to the audience in a crowded Dixon Hall, Hamid compared New Orleans to Lahore, Pakistan  his hometown and the setting for his novel.

“Lahore â¦ is the New Orleans of Pakistan,” Hamid said, “in the sense that it is big city on the river, it's genteel, it's got a real atmosphere to it. It's the home of good food, good music and it's a bit slow, it doesn't have the energy of Karachi.”

Beyond that, both cities are coming to terms with trauma and tragedy, he said. And while the characters in his book are dealing with the fallout from the 9/11 attacks, New Orleanians are still recovering from the watershed tragedy of Hurricane Katrina.

“We are all refugees from our own childhood,” Hamid said. “That notion of us each being a refugee  each having lost  is very central to the novel. If we indulge that too much, if we go into a kind of nostalgia, a longing for the past â¦ it can become a disease. That disease of nostalgia is very potent and dangerous.” 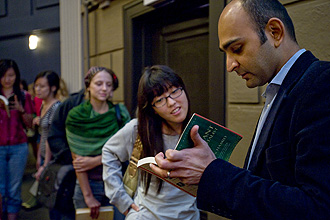 Mohsin Hamid signs a book for a student after his speech. Hamid's novel is the first work of fiction chosen for the annual Reading Project.

Regarding the Sept. 11 attacks, Hamid says he feels that they were an attempt to halt the mingling of cultural identity that is occurring in the modern world.

“I think this process of all of us mixing is happening all over the world, and that creates an enormous desire to stop it,” Hamid said. “New Orleans cuisine is enriched by the fact that things have come together to create something new. I think that is happening all over the planet, but people with national identities and religious identities ... are all about trying to stop this process.”

Hamid addressed the genesis of his novel, noting that it took him seven years to complete the 196-page work, and he joked about his agent's reaction to the scant page count.

“I felt like a fisherman who plopped his catch down on the table and said, 'That's one hell of a tuna,' and he said, 'No it isn't, it's a guppy.' It's the first time I thought that books sell by the pound.”

The author also treated the audience to a short reading from his book, his slight accent giving voice to the Pakistani protagonist who narrates the tale.

Addressing the dramatic monologue style in which his novel is written, Hamid said he employed it to pull the reader into the story.

“I try to cast the reader as sort of a co-writer. A lot of what happens in the novel is what you imagine, and that's why that particular form is suited to this book,” Hamid said. “A novel is a half a duet, with the other half provided by the reader.”

Comedian Dean Obeidallah continues the Reading Project dialogue on Oct. 7 in Dixon Hall with a topical night of comedy drawn from his experience as a post-9/11 Arab-American.