Author Writes Outside the Storm

Dan Baum disagrees with the age-old axiom, "Write what you know." Instead, "You should write about what you know nothing about, because then you've got to ask questions," says Baum, who asked countless questions while researching his book, Nine Lives: Death and Life in New Orleans. 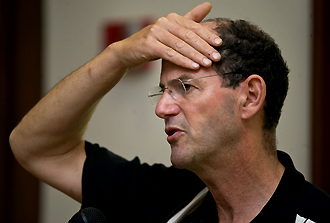 Questions, he says, his subjects wanted to answer.

"This is a storytelling city, and these people were traumatized," Baum says. "It was a perfect situation to get long and candid interviews."

Baum spoke at Cudd Hall on Wednesday (Oct. 14) as a part of the honors English course, "Literary New Orleans."

Like many journalists, Baum came to New Orleans to cover the aftermath of Hurricane Katrina. He was working for the New Yorker magazine at the time and wound up living in the city for four months, maintaining a daily blog and stitching together the narrative patchwork about the lives of New Orleanians that would become Nine Lives.

"Nobody was writing about who these people are and who they were before the flood, and, therefore, why the flood was so painful," he says.

Baum gives practical advice on interviewing, too: Use your laptop to transcribe the conversation, learn how to type fast, and ask unexpected questions.

"The way you make your story different from everybody else's is to ask questions that have nothing to do with the subject at hand," he says. "I was here asking stuff that had nothing to do with Katrina." Baum now lives in Boulder, Colo., a city he describes as the "anti-New Orleans."

"What I'm trying to do with the book is say, look, there's still this place in the United States where people know what it means to live their lives, and not just achieve something with their lives," he says.

Brandon Meginley is a senior majoring in journalism at Tulane University.