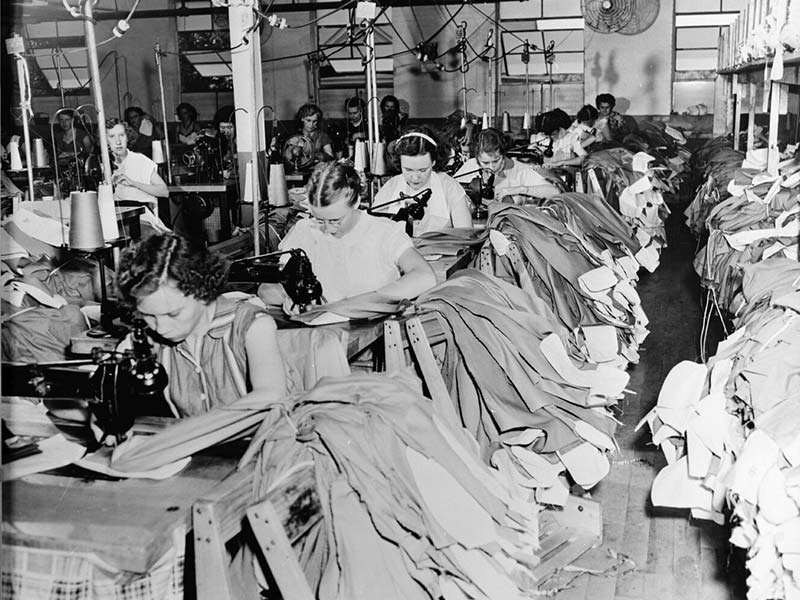 This photo taken in 1953 by Stell Photo Service in Winder, Georgia, displays the interior of one of the garment plants in the area with women employees at work. (Photo courtesy of Georgia Archives and Vanishing Georgia Collection)

Whether you’re buttoning up a new shirt or zipping up a jacket to brace yourself for cold weather, every seam of your garment tells the story of how it was made. In her book Striking Beauties: Women Apparel Workers in the U.S. South, 1930-2000, Michelle Haberland, a professor of history at Georgia Southern University, highlights the women who manufactured the region’s clothes throughout the 20th century. The work is the winner of the Southern Historical Association’s 2016 H. L. Mitchell Award, which is granted annually to publications illuminating the history of the southern working class.

The book evolved from Haberland’s doctoral dissertation that she completed during her time at Tulane. The 2001 graduate spent ten years developing her extensive research into a book.

“I didn’t intend to stay in the South originally, but when I got to Tulane, I saw a different side to Southern history and fell in love with New Orleans,” said Haberland.

“I’m trying to write women back into the history of the industrial South.”

Delving into the topics of women’s history and Southern culture, Striking Beauties examines how apparel manufacturing in the Southern U.S. relied on female labor from the industry’s regional expansion in the 1930’s through its dissolution at the end of the 20th century.

“The idea that industrial work is men’s work needs to be corrected. I aim to set the record straight that women have always worked in factories,” said Haberland. “I’m trying to write women back into the history of the industrial South.”

Haberland hopes that the honor of the H. L. Mitchell Award will draw more readers, allowing a larger audience to learn the stories of the women profiled.

“There was typically a woman running every seam through a sewing machine. I want readers to hear the voices of the women who sewed our clothes,” she said. “They were proud of what they accomplished and they should be.”