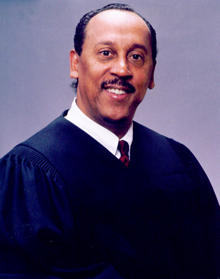 The newest member of the Board of Tulane is Michael G. Bagneris, a judge with Orleans Parish Civil District Court. He is a 1975 alumnus of the Tulane School of Law.

“I feel honored and privileged to be an integral part of an institution which has made and continues to make enormous contributions to our community,” Bagneris said of his selection to the board.

A native of New Orleans, Bagneris graduated from the Tulane School of Law in 1975 and soon afterward became an associate in the law firm of Fine and Waltzer. In 1979 he became a partner, and the firm was renamed Fine, Waltzer and Bagneris.

A year later Bagneris became executive counsel to New Orleans Mayor Dutch Morial. In 1986, he returned to his law practice at Waltzer and Bagneris, where he worked until being elected judge of Civil District Court Division H, where he has presided since 1993.

“Judge Bagneris brings a wealth of knowledge and wisdom to our board as well as a long affiliation with and deep affection for Tulane University,” Philip Greer, Tulane Board chairman said. “We look forward to his leadership, counsel and expertise.”

Tulane President Scott Cowen said Bagneris' ties to New Orleans will be especially helpful in the governance of Tulane.

“The future of Tulane and the future of New Orleans are linked as never before,” Cowen said. “Judge Bagneris enhances our board's local and national representation as we continue to elevate Tulane's standing among the nation's best universities.”

Bagneris' family has a long history with Tulane. His wife, Madlyn, earned a Master of Social Work from Tulane in 1982, and his daughter, Elizabeth, earned her bachelor's degree in African Diaspora Studies and Spanish from Tulane in 2002. His brother, Dennis, earned his juris doctor from the law school in 1981.

Bagneris also is involved in the arts community. He currently serves on the board of directors at the New Orleans Center for Creative Arts Institute, formerly served as president of the Jazz and Heritage Foundation and is a past board member of both the Ogden Museum of Southern Art and Friends of WWOZ. He also has been a member of the New Orleans Museum of Art and donor to the Amistad Research Center at Tulane.