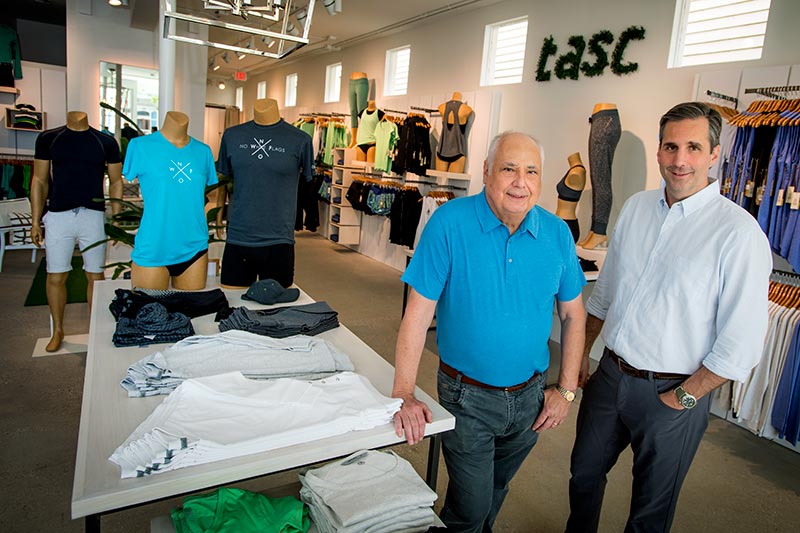 Co-founded by Tulane University alumnus Al Andrews and his son Todd Andrews, tasc Performance opened its flagship store on Magazine Street in early March. “It’s become somewhat of a lifestyle to wear performance or athletic clothing in a variety of settings. There’s a need for clothes that can move with the consumer,” said Todd Andrews. (Photo by Paula Burch-Celentano)

When Melissa Arnot became the first woman to reach Mount Everest’s summit without using supplemental oxygen in 2016, she kept warm by layering apparel provided by tasc Performance, a local sportswear company co-founded by Tulane University alumnus Al Andrews and his son Todd. Today, the business is reaching its own peak with the opening of a new retail store at 3913 Magazine St. in New Orleans.

A former Tulane basketball standout, Al Andrews graduated from the School of Liberal Arts in 1967 and received his law degree in 1971.

After gaining experience in textile development and manufacturing, he collaborated with Todd in 1995 to form the Andrews Sports Company with the goal of designing fashionable athletic wear.

“We landed on bamboo, which does what polyester does, but naturally.”

While exercising at the Reily Center, Al noticed that traditional workout wear had two common problems: It held odors and lacked softness.

The Andrews set out to create their own cutting-edge athletic apparel brand.

“Todd and I talked about coming up with a fabric that would wick moisture and provide UV protection,” Al Andrews said. “We landed on bamboo, which does what polyester does, but naturally.”

Blended with organic cotton or merino wool, the bamboo fibers are spun into yarn at a family-owned factory in India. The patent-pending process ensures that each piece is durable but easy to care for.

“Bamboo is a very difficult material to work with, so we spent two and a half years developing the process of spinning and dyeing the fabric,” said Todd Andrews.

By 2009 the process was perfected. Tasc Performance clothing has since been sold in approximately 800 stores across the nation.

The new flagship store now features the entire line of tops, bottoms and accessories designed for the most active individuals.

“Magazine Street attracts a lot of people from out of town, so we’re hoping to showcase our brand to a wide audience,” said Todd Andrews.

“We want to continue to grow and create brand awareness throughout the country,” added Al Andrews.