At Sunday's (Feb. 8) game in Avron B. Fogelman Arena in the Devlin Fieldhouse, Tulane will join women's basketball teams around the country in the fight against breast cancer as part of the Women's Basketball Coaches Association's Pink Zone campaign. 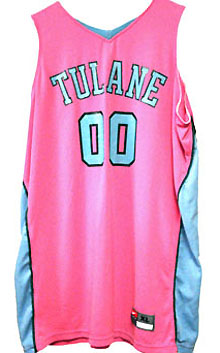 The Green Wave will make a donation to the Kay Yow/WBCA Cancer Fund, which is a partnership with the Jimmy V Fund. The two North Carolina State University basketball coaches lost their battles with cancer, Kay Yow last month and Jim Valvano in 1993. Fans can join the fight with a monetary donation and show their support by wearing pink to the game on Saturday at 2 p.m., when Tulane plays East Carolina University.

Green Wave head coach Lisa Stockton is especially grateful to have an opportunity to raise money for the breast cancer fight.

“Kay Yow has been a big influence on my professional life,” Stockton says. “I've known her since I was 10  she recruited me out of high school, and has been a great role model for me as a coach. I will miss her presence in my life and feel honored to have known her and to be able to support her fund.”

In honor of those fighting breast cancer, Tulane will forgo wearing its traditional home whites and don special pink jerseys for the game. Tulane is auctioning off three of the uniforms: Those of seniors Kendra Barnes, Ashley Langford and Megan Valicevic. The auction is under way now at the TulaneGreenWave.com online store and will close on Tuesday (Feb. 10).

Tulane players are actively raising donations. Fans can pledge  in honor of a cancer survivor, or in memory of a cancer victim  by printing donation cards and turning them in at Avron B. Fogelman Arena in the Devlin Fieldhouse on Sunday. In the spirit of competition, the Green Wave players are each trying to raise more contributions than their teammates, and you can back your favorite player by writing her name on the card.

Many families have gone through a loved one's fight against cancer, and the Green Wave family is no different.

“A day does not go by that I do not 'think pink,'” says junior Tulane guard Indira Kaljo. “My beautiful mom battled breast cancer for a year and half and in her memory I battle every day. When we set on the court on pink day, we will celebrate and rejoice with all the survivors and honor and pay respect to all who fought so hard.”

Sophomore forward Brittany Lindsey adds, “We support breast cancer awareness in an effort to educate women on preventive screenings and tests that could one day save their lives. Breast cancer affects the husbands, children, sisters and brothers of cancer victims. And it is for them I am honored to wear pink this Sunday.”