Battle for an HIV-free Generation

The battle against HIV/AIDS “is now in your hands, guys. It's time for you, who have the determination, to take it on,” Sheila D. Tlou told students at the Tulane health sciences campus on Wednesday (March 11). Tlou, who served as minister of health for the Republic of Botswana from 2004 until 2008, spoke about the progress her country has made in the fight against HIV/AIDS. 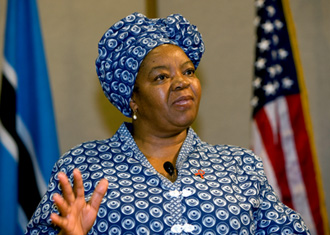 Sheila D. Tlou, former minister of health for the Republic of Botswana, addresses students in the School of Public Health and Tropical Medicine. (Photo by Rick Olivier)

In her address “Interventions for an HIV-Free Generation,” delivered to a group gathered in the Collins C. Diboll Auditorium at the School of Public Health and Tropical Medicine, Tlou encouraged students to find new preventive and gender-sensitive measures to reduce the burden of the disease.

Welcoming Tlou to Tulane, Jeffery Johnson, associate dean for admissions and student affairs, said, “This is a subject very near and dear to the hearts of our students and faculty here at the school.”

For more than 14 years, Tlou has been active in the fight against HIV/AIDS. As minister of health, she led a comprehensive HIV/AIDS prevention, treatment, care and support program in Botswana. During that time, transmission of HIV from mother to child decreased from 40 percent in 2003 to about 4 percent in 2008, while maternal mortality due to AIDS decreased from 38 percent to 9 percent.

“We have been an example and are showing the world that this can be done,” said Tlou. “We can win the fight against AIDS, even in a resource-limited setting.” Future challenges for Botswana include providing sexual and reproductive health counseling to children as they grow to become adolescents and giving adequate psychosocial support to children and families affected by AIDS, she added.

Tlou is a member of Botswana's parliament and the United Nations Eminent Person for Women, Girls, and HIV/AIDS in Southern Africa. Her work focuses on enabling women in a patriarchal society to negotiate with their partners for safe sex.

No stranger to New Orleans, Tlou completed her undergraduate degree at Dillard University, while taking several classes at Tulane. She also holds a PhD in nursing sciences, a master's degree in nursing education and instruction, a master of science degree in nursing, and several post-graduate certificates in women's health and gender studies.

Tlou's work has been vital in the fight against AIDS, said Tulane public health student Michael Gillette, who is a former volunteer with the Peace Corps in Botswana. “Dr. Tlou has focused her work not only on HIV but also women and children's issues, and not only in Botswana but all across Africa,” said Gillette. “We are honored to have someone who has been at the forefront of HIV since its beginning.”

Gillette, a candidate for a master's degree in tropical medicine and president of the public health school's Student Government Association, organized the event with support from the Department of International Health and Development. Tlou's appearance was part of the association's Distinguished Speaker Series.

Laura Post is communications coordinator in the School of Public Health and Tropical Medicine.