Anderson Cooper has made a career of bearing witness to tragedy. He has been the eyes for millions in the midst of wars and genocides, famines and natural disasters. Despite having his boots on the ground in some of the world's most infamous locales, the tone of Cooper's speech at Tulane's McAlister Auditorium on Tuesday (April 29) was more hopeful than morose. 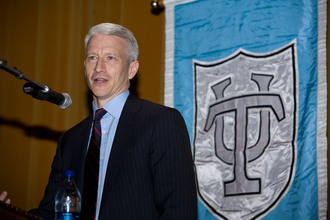 Tulane welcomed television journalist Anderson Cooper to the uptown campus on Tuesday (April 29), where he discussed his work and reflected on the importance of continuing to cover the impact of Hurricane Katrina on the Gulf Coast. (Photo by George Long)

The anchor of "Anderson Cooper 360°" on CNN and a sometime contributor to CBS News' "60 Minutes," Cooper joked that he finished his college career not knowing what he wanted to do with his life. He said he asked his mother, Gloria Vanderbilt, for advice, and she gave him a philosophical answer: "Follow your bliss."

Apparently Cooper's bliss comes from pointing an unblinking eye at that which would make many stomachs turn. He said he had found his calling in sub-Saharan Africa the summer before he even enrolled at Yale University.

"Africa opened my eyes and quickened my pulse," Cooper said. "It was the first time I had a gun pointed at me and had to talk my way through a road block."

Despite never studying journalism, and being rejected for an entry-level job at ABC News, he decided to travel to war zones on his own dime. His bold move was the beginning of a career that has brought him to Somalia, Rwanda, the Democratic Republic of Congo and, most recently, Iraq.

Cooper has been to Iraq four times and says it is by far the most difficult war he has covered.

He says he sees signs of "a mindset of change" in some of our opponents in Iraq, in the face of the government's lack of ability to reconcile the sectarian rift, which is the root of much of the violence there.

Other than his coverage of wars and atrocities, Cooper is known for his reports from New Orleans and the Gulf Coast following Hurricane Katrina. He has shown a unique devotion to New Orleans, working to keep the city's recovery in the national zeitgeist  something he acknowledged other news outlets have let fall by the wayside.

"Katrina is an example of why news still matters," Cooper said. "So much of what happened here threatens to be forgotten. Brian Williams [NBC News anchor] seems to have some interest, and maybe the New York Times. But other than that, I don't see much coverage, and I find that disappointing. I keep working here because it's important for all of the country to remember."

During the question-and-answer period, more than one person thanked Cooper for his continued coverage. He was quick to turn the gratitude back on the audience in McAlister.

"It makes me sad that you are thanking me," he responded. " A lot of people made a lot of promises, and it makes me sad those people didn't follow through. What we learned from Katrina is governments fail, people do not."

It doesn't seem like Cooper is planning to slow down anytime soon. He says he has no time off, but he didn't lament the fact. Instead he said he is focused on what he has found to be his bliss.

"People want their story told. They want to be heard, and I get that."