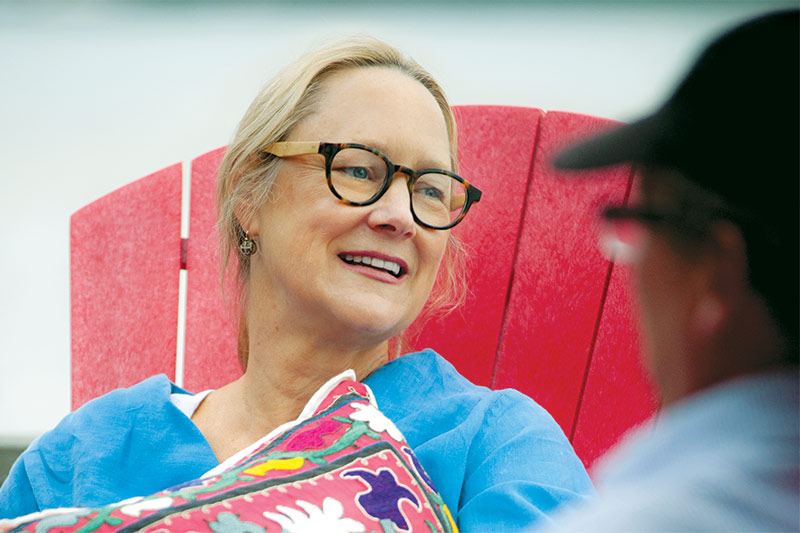 It’s somewhere between seasons here on the banks of Lake Bruin, and the weather hasn’t made up its mind as to what it wants to do. Becky Watson Vizard (NC ’81) crouches in the garden planted by her husband, Michael, taking advantage of a respite in the rain to harvest arugula and baby kale for tonight’s dinner.

“It’s what I’ve been telling people forever,” she says between snips. “The real story is about working from here.”

You look around her comfortable, landscaped yard nestled between the back of her rustic two-story home and the wavering sheen of the lake and think you understand what she means by that, but you really don’t. Not yet.

Four hours upriver from New Orleans in Tensas Parish, an hour north of Natchez, Mississippi, is Vizard’s tiny, dwindling hometown of St. Joseph, Louisiana. Her house is 8 miles outside of town and a million miles from anywhere Vizard thought she’d be at this point in her life.

That B. Viz Design, Vizard’s small company run from a cramped little studio inside her home, is something of an economic engine in this neck of the woods tells you a bit about the greater metropolitan area of St. Joseph, population 1,176 and counting—down.

Vizard employs five workers—four seamstresses and an office manager—in the unlikely rural enterprise of high-end interior accessories. More specifically, she incorporates rare, antique textiles into fashionable, hand-sewn pillows, which she sells across the globe mostly over the internet but also in a handful of exclusive retail outlets.

Inside the studio, Belinda Prudhomme, an employee and friend for nearly 30 years, stands at a worktable using a pair of manicure scissors to delicately remove a floral pattern of gold metal-thread embroidery from a tattered fabric made sometime in the mid-19th century.

Want to keep reading? Click here for the rest of the story.