If you build a bike lane, more New Orleanians will ride. At least, that's what has happened since the Upper and Lower 9th Wards received three miles of bike lanes, according to researchers in the Tulane Prevention Research Center. 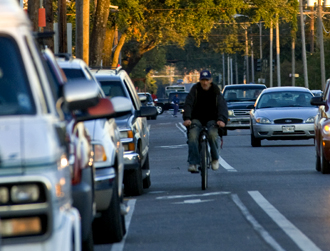 With new bike lanes in one New Orleans neighborhood, the number of cyclists on the street has risen by 57 percent, according to a study by the Tulane Preservation Research Center. (Photo by Paula Burch-Celentano)

As part of post-Katrina rebuilding, in May 2008 the city painted bike lanes on both sides of St. Claude Avenue from the Industrial Canal to the St. Bernard Parish line. The Prevention Research Center's year-long evaluation of lane usage found an increase in the number of cyclists using St. Claude, as well as an increase in the percentage of cyclists who correctly rode with the flow of traffic.

“The recovery of New Orleans is an opportunity to build a healthier city, and infrastructure that encourages people to ride their bicycles is one way to do that,” says Kathryn Parker-Karst, assistant director of the Prevention Research Center, which handled the research project. “These results show that people in New Orleans will take advantage of new improvements that encourage physical activity, which is essential for combating the obesity problem in our city.”

Researchers found the overall average number of cyclists on the street increased by 57 percent from 2007 to 2008. While the number of both female and male riders grew, the greatest increase was among adult females, whose numbers surged by 133 percent. This finding suggests that adult females may be more likely to respond to safety improvements in riding conditions than adult males, says Parker-Karst.

Researchers also found that the construction of the lanes positively influenced safe-riding behavior. The percent of bicyclists riding with the flow of car traffic increased from 73 percent to 82 percent.

Studies show that people are more physically active in neighborhoods that are designed to accommodate walking and bicycling. The increased number of cyclists using St. Claude since the bike lanes were painted supports the idea that changing the physical environment effectively can promote physical activity, Parker-Karst says.

Efforts to encourage exercise are particularly important in Louisiana, where, according to the U.S. Centers for Disease Control and Prevention and the Pennington Biomedical Research Center, two-thirds of adults and more than one-third of children and youth are overweight or obese.

The New Orleans Department of Public Works plans to paint additional bike lanes as other streets are resurfaced with post-Katrina recovery funds. Bike lanes are planned on Filmore, St. Bernard, Leon C. Simon, Paris and Carrollton avenues. The Prevention Research Center, which is affiliated with the School of Public Health and Tropical Medicine, will study the effect of these proposed bike lanes on ridership.

Lisa Hoffman is communications and training coordinator at the Prevention Research Center in the Tulane School of Public Health and Tropical Medicine.