Bike Shop to Get Permanent Home

For more than a year, pedal pushers at Tulane have been learning how to fix their own bicycles on the uptown campus. 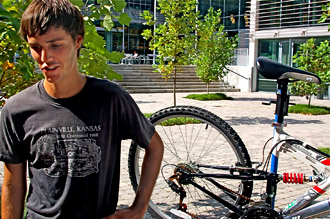 Training cyclists on how to repair their bikes is part of the mission of the Bike Help Desk, says Phil Schapker, a junior who doubles as a student bike mechanic and president of the student Juggling Club. (Photo by Nick Marinello)

With the help desk now in its third semester, Phil Schapker, president of the student Juggling Club, says he and co-mechanic Patrick Townsend see between 15 and 20 bikes each Sunday.

According to Schapker, the idea for the bike shop came out of a campus sustainability think tank last year. “And then a group of students approached me and asked if I'd like to take on this project,” he says.

The Juggling Club eventually “annexed” the bike shop by writing its operation into the club's constitution, says Schapker.

By the start of the spring semester, the shop will be operating out of its own facility, thanks to recently approved funding that the Juggling Club received from the Undergraduate Student Government.

The bike shed, which will be located in the 6300 block of Willow Street, will be constructed by group members following a plan designed by an architecture student. According to Schapker, the shed will give the shop a permanent location and allow for storage of repair tools and materials.

Unlike a commercial repair shop where customers drop off their bikes and return later for pick-up, the campus bike shop exists to train cyclists how to maintain their own bikes.

“There are way too many people who own bicycles and who could ride bicycles, but don't because of minor repair issues like the brakes not working and flat tires,” says Schapker. “The more people we get to understand the basic brake adjustments, they can help their friends who will help their friends.”

While most first-time visitors expect to simply watch their bikes being repaired, customers are encouraged to get involved so that in the future they can tackle the repair by themselves or with little assistance.

“While we normally don't charge a fee, if you drop off your bike and then say, 'I'm going for a bagel,' and return once we've completed the repair, you may be charged a ridiculously unfair and unreasonable price,” Schapker jokes.

Plans are for the bike shop to be in its new home starting next semester. Until then, the shop will operate at its new temporary location and with expanded hours  outside of Le Gourmet on McAlister Drive on Sundays, 1â“4 p.m., and Thursdays, 2â“5:30 p.m.  through the end of this semester.