Poet Billy Collins shared his joy of poetry with a thousand people on Monday (March 16) in McAlister Auditorium. Audience members laughed and clapped as Collins, a former poet laureate of the United States, read dozens of poems from his best-selling books. 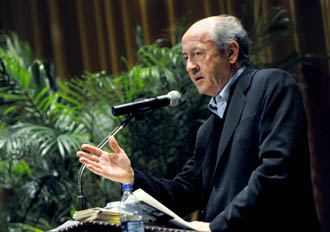 Former U.S. poet laureate Billy Collins reads one of his poems during his lecture at Tulane on Monday (March 16), part of the English department's Poet Laureate Series. (Photos by Cheryl Gerber)

Collins' appearance is part of the Poet Laureate Series sponsored by the Creative Writing Fund of the Tulane Department of English.

From haikus to longer poems, Collins showed off his witty wordplay for more than an hour. He touched on the mundane to the profound things in life, saying that he usually tries to begin his poems with the commonplace, like divorce or salt and pepper shakers.

Collins' mixing of the serious and the humorous along with his respect for his readers makes his poetry both accessible and successful. But readers should not be fooled by the apparent casualness or off-the-cuff sound of Collins' poems, said Tulane English professor Peter Cooley, who introduced Collins to the audience.

Cooley said that Collins' poems remind him of words by the great Irish poet W.B. Yeats, “A line will take us hours maybe; but if it does not seem a moment's thought, our stitching and unstitching has been naught.”

Collins' special stitching and unstitching could be heard in “Building With Its Face Blown Off,” a poem he wrote in reaction to photographs that he said he has seen in newspapers since being old enough to look at them. (Collins was born in 1941.) It's a poem about houses in war-torn cities but its vivid imagery could recall houses in New Orleans in the aftermath of Hurricane Katrina. A few lines from the poem are:

“And the bathroom looks almost embarrassed 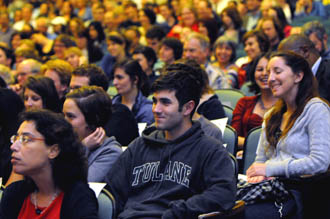 The smiles of audience members in McAlister Auditorium are testament to the popularity of Billy Collins and his poetry.

by its uncovered ochre walls,

the twisted mess of its plumbing,

the sink sinking to its knees,

as if a child on its knees could reach in

and pick up the bureau, straighten a picture.”

To the poets in the audience, he counseled, “When in doubt, if you're stuck in a poem, have a dog come in. You'll get over your self-absorption for a stanza or two.”

Collins read a funny dog poem, “The Revenant,” about a dog put to sleep by his owner who then speaks back to the owner from “oblivion.” “I am the dog you put to sleep,” the poem begins. It then goes on to say, “I never liked you  not one bit.”

In a nod to the musicians, Collins' last poem of the night was “Nightclub.” It begins, “You are so beautiful and I am a fool to be in love with you,” and moves from there, tossing about the words “love," "beauty" and "fool,” which are often sung in jazz standards.

Collins ends the poem, “We are all so foolish, my long be-bop solo begins by saying, so damn foolish, we have become beautiful without even knowing it.”

Nearly 100 people stood in line after the reading to have Collins autograph his books, which they purchased at a Tulane Bookstore outpost set up in the lobby of McAlister Auditorium.