When Thomas Freeman arrived in the lab of William Wimley in the Tulane School of Medicine, he propelled the lab into a new era of research. In recognition of his work, Freeman received a Minority Travel Award from the Biophysical Society to travel to Long Beach, Calif., for the joint meeting of the Biophysical Society and the International Biophysics Congress. 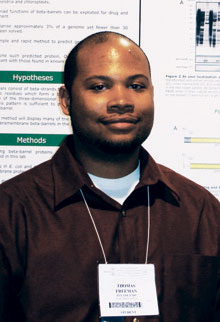 Thomas Freeman, a graduate student in the lab of William Wimley, was able to attend the world's largest meeting of biophysicists with a Minority Travel Award from the Biophysical Society.

Freeman, who is working toward a PhD in biochemistry in the biomedical sciences graduate program in the School of Medicine, was selected for the award for his research on proteins of disease-causing bacteria.

He is one of four graduate students working in Wimley's lab, which has more than $1 million in funding from the National Institutes of Health over four years. Wimley, an associate professor of biochemistry, says Freeman was instrumental in securing the grant renewal that the lab received after Hurricane Katrina.

“He is responsible for taking my lab into an entirely different realm,” Wimley says. “Our work has focused on a model system of synthetic membranes to study proteins on the surface of cells. Now we can take our work to the next step using living organisms, rather than other labs pursuing that work based on our model system studies.”

According to Freeman, “We are developing a technology to find the genes related to proteins that are present on the surface of certain types of disease-causing bacteria. This technology will someday be used to expedite the development of new vaccines or drug therapies against these bacteria.”

Freeman says that he also is interested in disparities in public education based on regional socioeconomic status, and hopes to one day found a science and technology academy for underprivileged children.

“My desire to give this opportunity to the community is inspired by a number of extraordinary people who gave me opportunities that shaped who and what I am today,” says Freeman, a graduate of Xavier University in New Orleans. “I've experienced most of the situations that urban youth face, and in spite of those things I managed to succeed because of my strong mother and several teachers who saw in me something remarkable. I hope to repay their investment in me with interest.”