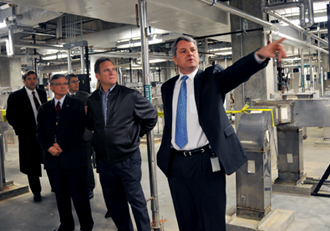 Andrew Lackner, right, leads a tour inside the new $27.5 million Regional Biosafety Lab that was dedicated on Friday (Dec. 5) on the grounds of the Tulane National Primate Research Center in Covington, La. (Photos by Sally Asher)

Andrew Lackner, director of the primate center said the 80,000-square-foot facility in Covington, La., would increase the center's research capacity, furthering its mission “to protect the health and safety of the state, region and the nation.”

In his remarks, Tulane President Scott Cowen touted the facility as one of only 13 National Institutes of Health-supported biosafety level 3 laboratories in the country, and the only one affiliated with a primate research center, medical school and school of public health and tropical medicine.

Calling the primate center one of the “great assets of the Tulane community,” Cowen commended the work that will be done at the lab, saying it will serve as “a center of excellence” that will serve the community.

Michael Kurilla, director of biodefense research affairs and associate director for biodefense product development for the National Institutes of Health and the National Institute of Allergy and Infectious Disease, praised the facility's goals, saying that research undertaken at the lab would help the United States deal with today's known threats, as well as unanticipated threats of tomorrow.

“We look forward to the future when this lab will push back the limits of science,” Kurilla said. 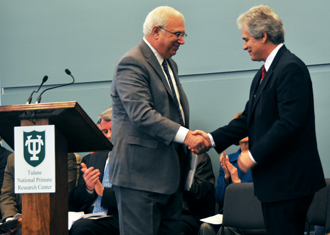 During the dedication ceremony, Tulane President Scott Cowen, left, welcomes Michael Kurilla, right, a senior administrator at the National Institutes of Health, which provided part of the funding for the new laboratory.

State Sen. Jack Donahue, State Rep. John Schroeder as well as representatives for Louisiana Gov. Bobby Jindal and St. Tammany Parish president Kevin Davis attended the dedication, heaping praise on the center and the university for their contributions to the North Shore community.

The lab will not only generate research, but also will contribute the center's positive influence on the local economy. The annual payroll for the new facility will be $2.2 million, with a projected $42-million impact on the region during the next five years.

Following the dedication of the building and the official ribbon cutting, guests were invited to take a tour of the facility and watch demonstrations of the high-tech security measures put in place in light of the nature of the intended research.

Biosafety level 3 is a national designation for labs built with strict safety standards to study airborne contaminants and infectious diseases.