A New Orleanian who is an attorney and civic leader and a Tulane alumnus who is president of a biomedical research institution are the two newest members of the Board of Tulane. 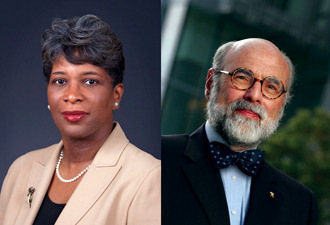 Kim Boyle, left, and Dr. Michael Friedman have joined the Board of Tulane, the university's main governing body.

As he announced the new members, Tulane President Scott Cowen said, “Together, Michael and Kim bring a wealth of knowledge, leadership, vision and dedication to our board. I look forward to their guidance and counsel as we continue to fulfill the promise of Tulane.”

Boyle, a graduate of Princeton University and the University of Virginia School of Law, is a partner in the employment law group in the New Orleans office of Phelps Dunbar. She practices in the areas of labor and employment, civil rights, constitutional law, commercial litigation and general litigation.

Joining the Board of Tulane is the latest in Boyle's long commitment to New Orleans. She also has served as co-chair for the Committee for a Better New Orleans/Metropolitan Area Committee and is a current member of the local advisory board for the United Negro College Fund. A board member of the Greater New Orleans Foundation, she is its former secretary. She also served as trustee for the WYES-12 board of directors and a board member for the Bureau of Governmental Research.

In addition, Boyle has served as chair of the Louisiana Recovery Authority's healthcare committee and previously worked on the Bring New Orleans Back Commission as chair of its health/social services committee. She was a founding member of the Fleur-de-Lis Ambassadors program and is currently president-elect of the Louisiana State Bar Association.

Friedman is president and chief executive officer of City of Hope, an independent biomedical research, treatment and education institution located near Los Angeles. City of Hope is a world leader in the fight to conquer cancer, diabetes, HIV/AIDS and other life-threatening diseases.

Before arriving at City of Hope, Friedman was a senior vice president of research and development at Pharmacia Corp. He also served as chief medical officer for biomedical preparedness at the Pharmaceutical Research and Manufacturers of America. He previously was with the U.S. Food and Drug Administration as deputy commissioner and was tapped by the Clinton administration to serve as acting commissioner of the FDA.