When political strategist and native New Orleanian Donna Brazile stepped to the podium on Friday (Feb. 6) as part of the Newcomb College Institute's Power Lines Summit, she delivered a charged-up address that was unmistakably tailored to the audience filled with female students, political office holders and university professors from around the country. Brazile challenged the group and nailed the essence of her address  women must be proactive in defeating the stereotypes they face in the political arena. 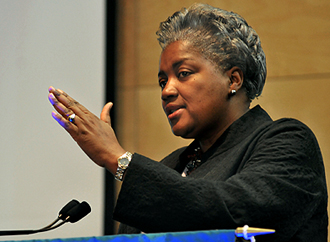 The opening speaker for the Power Lines Summit on Friday (Feb. 6), New Orleanian Donna Brazile encourages women to be proactive in defeating stereotypes in the political arena. (Photos by Sally Asher)

“It's time we hurry history and the best way to do it is to visualize yourself as a powerful person, whether in politics, academia, media, the sciences or whatever professional endeavor you might take on,” said Brazile. “We have to confront the negative stereotypes that somehow we are indecisive and that we don't know how to make tough decisions.”

Speaking in the Kendall Cram Lecture Hall in the Lavin-Bernick Center, Brazile walked the audience through her experiences as a political commentator on CNN, ABC and National Public Radio, recalling how she decided to read and study about foreign issues in order to take on more than just what was happening in America.

Using as an example former Louisiana Gov. Kathleen Blanco, who sat in the audience at the 9 a.m. program, Brazile criticized how the media covered Blanco's emotional quest to get help to the coastal region of the state following hurricanes Katrina and Rita in 2005. Between cheers from the audience, Brazile mocked the reporters who were covering the aftermath of the storms. 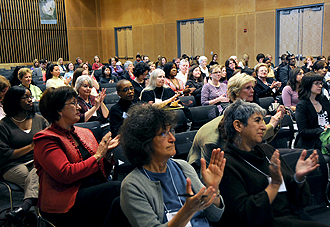 Members of the Kendall Cram Lecture Hall applaud Donna Brazile. Among the group is former Louisiana Gov. Kathleen Blanco, at left in the red jacket, who was keynote speaker at Saturday's (Feb. 7) session.

“Where's the governor? How does she look? How is she feeling?” chimed Brazile. “Her people had just been wiped out, so what was she supposed to do but stand up and reflect the pain that we were all experiencing at that moment?” Blanco was keynote speaker at Saturday's (Feb. 7) session of the summit.

Following Brazile's keynote address, audience members presented questions such as “What's the first step toward a successful career in politics?” and gave tearful thank-yous to Brazile for being an inspiration to personal careers and educational decisions.