Through a collaborative effort of nonprofit organizations, neighborhood associations and Tulane University, a fund-raising drive is under way to purchase and plant new trees along Broadway, a street bordering the Tulane uptown campus. The organizations' goal is to raise $25,000 to purchase 300 trees in time for “Replant Broadway Day” on Saturday, March 14. 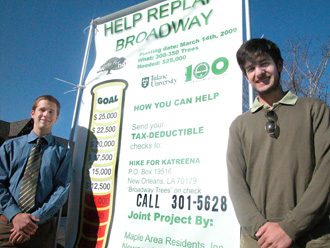 Taylor Conrad, a Tulane sophomore from Shreveport, La., left, and Sean McGuire, a sophomore from Oakland, Calif., have taken an active role in a project to replant trees destroyed by Hurricane Katrina near the uptown campus. (Photo by Alicia Duplessis)

The tree planting will extend almost the entire length of Broadway from the Mississippi River, to St. Charles Avenue, along the campus border and fraternity row, to Claiborne Avenue and Fontainebleau Drive.

The new trees, at a cost of approximately $100 each, will replace hundreds of trees destroyed by Hurricane Katrina in 2005.

Ted Le Clercq, president of the Newcomb Boulevard Association, says, “Katrina took many things from us as a community, and Broadway had much damage. Sometimes it is hard to see dramatic improvement from isolated actions. However, the joint effort of these organizations gives us a chance to do something great. And it will happen in less than two weeks with the community's support.”

Contributions from Tulane and Hike for KaTREEna, a nonprofit organization dedicated to replanting trees in the city, has helped to get the fund-raising ball rolling, but additional funds are still needed, says Le Clercq.

He hopes that surrounding neighbors as well as anyone who loves the city will contribute to the beautification effort either by offering their time or donations.

Le Clercq says that he is grateful to Tulane students who have volunteered to replant Broadway. Among those students are Zeta Psi fraternity members, sophomores Taylor Conrad of Shreveport, La., and Sean McGuire of Oakland, Calif. Conrad and McGuire, together with three other students, also are combing the campus to find financial support within the Tulane community.

“A lot of our friends are in different campus organizations and we figured we could use those organizations to get through to other students who might want to donate by volunteering or by offering money,” says Conrad. “We are also hoping to reach members of the faculty and staff.”

Tax-deductible donations can be made payable to the Hike for KaTREEna organization by mail at P.O. Box 19516, New Orleans, LA 70179 or by calling 504-301-5628. Questions about volunteering may be directed to monique@hikeforkatreena.org.