Brown pelican stars as harbinger for Louisiana in new book 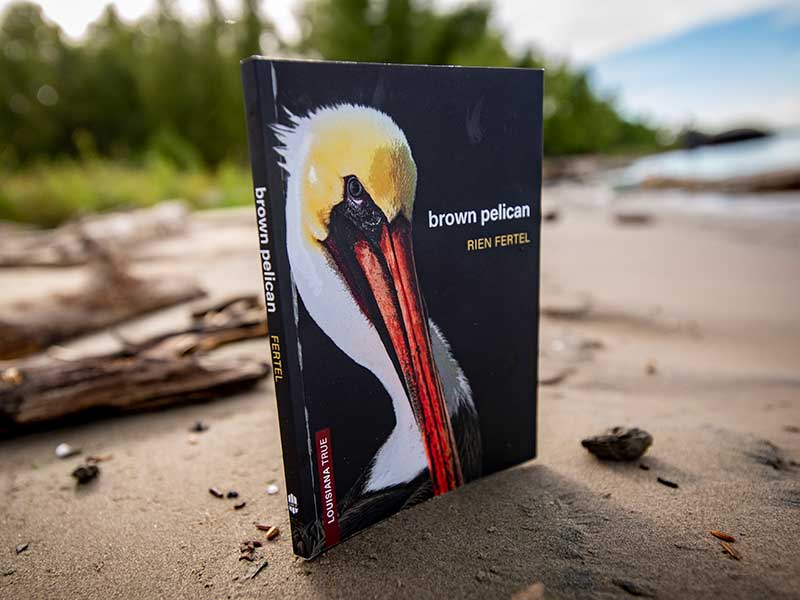 In “Brown Pelican,” Rien Fertel, visiting assistant professor in the Department of History at Tulane’s School of Liberal Arts, presents a succinct and highly readable history of the pelican up to the present day and its defense by the Louisiana Coastal Protection Restoration Authority. (Photo by Paula Burch-Celentano)

The brown pelican is, as many people may know, a symbol of Louisiana.

A mother pelican with the species’ distinctive long beak is depicted as the Pelican in Her Piety on the state flag. She’s nourishing her brood of chicks with her own blood.

That’s where the idea: not for one’s self, but for one’s own, Tulane’s motto, came from.

But did you know the tortuous, fraught saga of a bird that has fascinated artists and writers for eons and was brought back from near extinction because of pesticides in the 1970s and then endured the BP Oil Spill of 2010 to almost flourish today on the Louisiana coast in a fragile resurgence?

Fertel earned his BA and PhD from Tulane and is a visiting assistant professor in the Department of History at Tulane’s School of Liberal Arts.

Fertel became intrigued by the pelican when he read about the artist Walter Anderson who loved pelicans so much that he lived alone with them for a time on the Chandeleur Islands at the edge of the Louisiana boot in the Gulf of Mexico.

In Brown Pelican, Fertel presents a succinct and highly readable history of the pelican up to the present day and its defense by the Louisiana Coastal Protection Restoration Authority.

Fertel would like for readers to take away from Brown Pelican that the story of this bird “can, at times, be a bleak one, with several near and real extinction events. But I hope readers learn that because of past and through future human engagement the brown pelican has, can, and will thrive.”