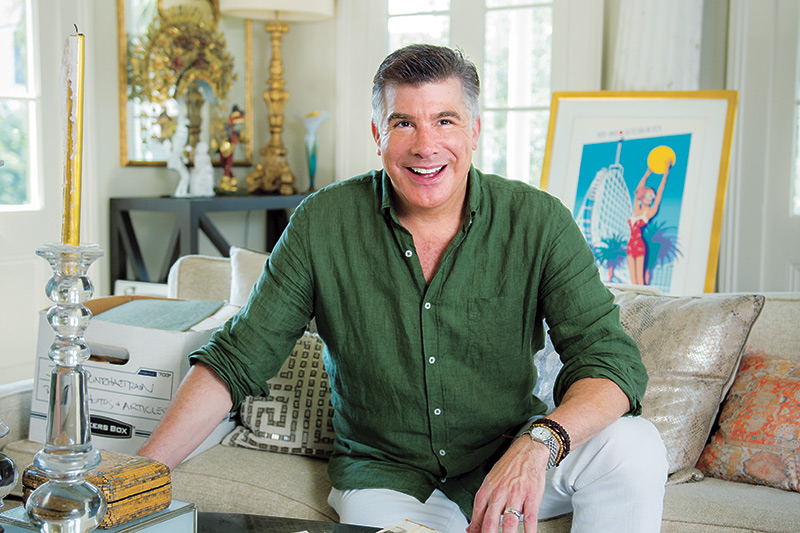 Tulane alumnus Bryan Batt has made a name for himself in Hollywood. (Photo by Paula Burch-Celentano)

ALONG FOR THE RIDE

Actor Bryan Batt (A&S ’85) knows that a career in show business can have as many twists and turns as a carnival ride.

“My career and life have been like a roller coaster, but considering my family, that’s just perfect, and I love it!,” said the native New Orleanian, whose inherent sunny outlook and fondness for thrills is heavily influenced by his childhood spent at Pontchartrain Beach, the iconic local amusement park owned and operated by his family from 1928 through 1983.

“My maternal grandmother, Hazel, was a well-known dance teacher in New Orleans, and my paternal grandfather, Harry Batt Sr., founded Pontchartrain Beach. Somewhere down the line, I developed this same affinity for entertainment,” said Batt.

After graduating from Tulane in 1985 with a bachelor of arts degree in theatre, Batt brought Big Easy charm to New York stages.

Batt landed leading and principal roles in beloved Broadway standards like Sunset Boulevard, Cats and Beauty and the Beast.

He next plans to work on staging Dear Mr. Williams, a show that he wrote exclusively for the Tennessee Williams/New Orleans Literary Festival.

Batt has also appeared on both the small screen and silver screen.

This October, Batt will play the role of a clairvoyant in need of an exorcism in Tales From the Hood 2. The sequel to the 1995 cult film favorite is executive produced by Spike Lee.

Batt is also set to appear in another horror film called Darlin’ and has started filming a new movie called American Reject, a comedy centered on a cast-off contestant from a reality singing competition.

Before he ever opened the storied Art Deco-inspired Midway at the end of New Orleans’ Elysian Fields Avenue, Bryan Batt’s grandfather was known for a different line of work.

After the success of his first two books, She Ain’t Heavy, She’s My Mother: A Memoir and Big, Easy Style: Creating Rooms You Love to Live In, which he co-authored with Katy Danos (NC ’85), Bryan Batt decided to chronicle his grandfather’s entrepreneurial spirit through the story of how “the iceman became a showman.”

Batt received inspiration to pen the work after sifting through stowed-away items kept in his mother’s garage after she passed away.

“My brother and I thought we were going to find Jimmy Hoffa in there,” joked Batt. “She kept tons of boxes from my father’s Pontchartrain Beach office—stuff that was previously not seen before.”

After discovering his grandmother Marguerite’s journals and copies of the beach’s newspaper, Breezy Brevities, in the mix of park memorabilia, Batt once again collaborated with Danos to highlight the glory days of the Midway in a new book called Pontchartrain Beach: A Family Affair.

“It all came together last summer. We hunkered down and turned Katy’s living room into our work space,” said Batt.

“Pontchartrain Beach was part of my very being. It was such a beloved New Orleans institution and was in our family for the entire length of its run,” added Batt. “I was 14 years old when my grandfather passed away. I didn’t realize the impact that he had made until doing research for this book. He was an incredible man.”

“People who are not from New Orleans or who never visited Pontchartrain Beach will still enjoy the book, because we all share similar memories of our local amusement park,” said Batt.

Pontchartrain Beach: A Family Affair (Pelican Publishing) will be released this fall.