Billionaire investor Warren Buffett shared his thoughts on the future of Wall Street, the upcoming presidential election and what he looks for in a good investment during a two-hour, question-and-answer session in Omaha, Neb., that included students from the A. B. Freeman School of Business at Tulane University. 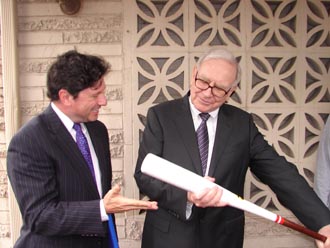 The “Oracle of Omaha,” billionaire Warren Buffett, right, reads the inscription on a special baseball bat from Tulane presented by Peter Ricchiuti, left, assistant dean of the A. B. Freeman School of Business. (Photos by Derek Little)

Peter Ricchiuti, assistant dean at the Freeman School, and 27 Tulane students visited Buffett on Friday (Oct. 17) at Berkshire Hathaway Inc., the conglomerate holding company where he is chairman and chief executive officer, for a meeting that included lunch and tours of two of his companies.

Students from Tulane and five other universities visited the famed “Oracle of Omaha” on the same day he published a headline-grabbing opinion piece in the New York Times announcing his plans to take his cash holdings and invest in U.S. stocks.

“You couldn't have timed the trip better,” Ricchiuti said. “He spent two hours answering our questions and then he took us to lunch at a place called Piccolo Pete's. After the lunch he must have spent an hour and a half letting us take pictures with him.”

“The trip was amazing,” said business school senior Stephen Frapart, who was instrumental in organizing the visit. “It was truly one of the most special experiences in my life. Everything you've read, seen or heard about Warren Buffett is all true. He is charismatic, humble, funny, sincere, brilliant and an excellent communicator.”

Ricchiuti and students were impressed that, despite being one of the world's richest men, Buffett was very modest and unassuming. He drives his own car, a late 1990s Lincoln Continental, and lives in the same house as he did 40 years ago. 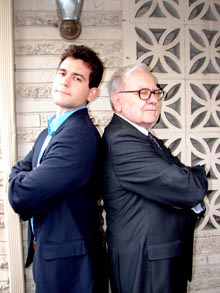 Ed Wendel, left, graduate student in finance, and Warren Buffett strike thoughtful poses in a photo session during the Tulane students' visit with the famed investor.

The all-day visit included tours of Berkshire Hathaway subsidiaries Nebraska Furniture Mart and Borsheims, one of the largest independent jewelry stores in the nation.

Frapart asked Buffett what he considered to be the defining moments in his life and what he learned from them. Other Tulane students asked how the economic slowdown in the United States would affect other countries and how Buffett determined his vote in the presidential election.

Buffett said he approached the election the same way he views other choices in life, by looking at the larger picture. He said to look at the world's population as a lottery with 6.1 billion names in a barrel. If your fate were determined by picking a station in life, who would you want representing your interests?

“(In picking from the barrel), you didn't know what you would get. You could be somebody from Bangladesh, from the United States, or male or female, black or white, or healthy or sick,” Ricchiuti said, recounting Buffett's views. “If that were the situation, who would you vote for? Who was going to be the best president for everybody?”

“My favorite idea that he talked about was that an individual chooses his or her behavior and personality,” she said. “I liked it because it reminded me of something my dad has been telling me for as long as I can remember. My dad says that happiness is an act of will. I liked that Warren Buffett wanted to talk about appreciating and enjoying life as much as he wanted to talk about investing.”

Buffett said he looks for simplicity in investments and seeks companies that are positioned for growth because of their service or product, not because of their management, which can easily change. He told students they should look at companies that “an idiot could run, because at some point an idiot is going to run it,” Ricchiuti said.