The Building Block of Machines

While microchips found in everyday electronics have gradually decreased in size until they are now smaller than the point of a sharpened pencil, Tulane University scientists are making contributions to research that could one day produce semiconductors that are a million times smaller. In doing so, Alex Burin, an assistant professor of chemistry, and graduate assistant Gail Blaustein are delving into the electronic properties of DNA. 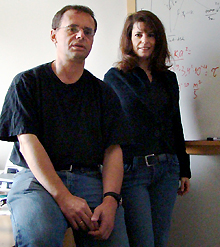 Assistant professor of chemistry Alex Burin and graduate assistant Gail Blaustein are delving into the electronic properties of DNA, which may produce semiconductors that are a million times smaller. (Photo from Burin lab)

A molecule of a material is the smallest particle capable of retaining the physical property of the material, such as the ability to conduct charge. Some molecules possess surprising physical properties that one would not expect. For instance, Burin believes that the DNA molecule is capable of functioning as a semiconductor.

As a result of collaborative research in the area of theoretical physical chemistry, Burin's lab has had its latest research paper published in the January 2009 issue of the Journal of the American Chemical Society, a peer-reviewed scientific journal. Burin also is the lead author of a paper in the Jan. 21, 2009, issue of the Proceedings of the National Academy of Sciences.

The Tulane lab's research into DNA photonics represents collaboration with Argonne National Laboratory, Northwestern University and Boston College, and is sponsored by the National Science Foundation.

“Our partners have been putting together structures called DNA hairpins, which is a relatively new thing in terms of being able to construct in a laboratory,” Burin says.

A DNA hairpin is a single strand of DNA that is bent over like a bobby pin, with several DNA base pairs matched up on each side of the loop.

Instead of studying a long strand of naturally occurring DNA that contains thousands of paired bases, scientists prefer to study electron movement in DNA hairpins, where the properties of the DNA are controlled by the deliberate choice of the base pairs contained in it. A small DNA hairpin still offers up “everything about its physics, chemistry and biology,” says Burin.

Blaustein adds, “It's not a huge mess of different combinations of base pairs where you're trying to figure out what is contributing to what effect.”

By providing optical energy to a molecule of DNA with a laser, scientists are studying how to observe and analyze the manner in which electronic charge is transmitted through these hairpins as well as learning how to interpret the data.

“Instead of photo-exciting DNA by laser, perhaps one day we will be able to control photo excitation by the sun,” offers Burin. “Photo excitation by solar energy would permit us to separate a charge and do something with it  that's how a solar cell is supposed to work.”

The research has implications for bioengineering, medicine and physical chemistry as well as other areas. For instance, says Burin, DNA molecules may one day be integral in producing electricity more efficiently and less expensively than current silicon solar panels. The way a charge moves through a DNA sequence may one day be instrumental in identifying genetic disorders, genetic damage or viral infections.

“Many people are looking for the perfect machine, but it literally may be right in the palm of our hands,” Burin says. “The art is how to extract the information that we need to know.”