What a difference a year makes. At last year's Burkenroad Reports Investment Conference, 33 of the 34 companies that were featured posted negative returns for the preceding 12 months. This year, 28 of 33 companies posted positive returns, including top performer Stone Energy, which generated a total return of 337.89 percent for the year. 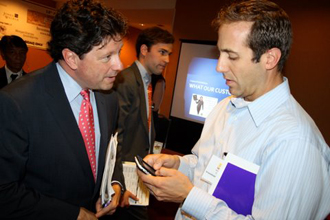 Peter Ricchiuti, left, organizer of the Burkenroad Reports Investment Conference, talks with a conference attendee during the event. (Photo by Stephen Daigle)

"The market is up 83 percent in the last 13 months, which is the best 13 months in history," says Peter Ricchiuti, assistant dean at the A. B. Freeman School of Business and organizer of the annual event. "I think the people in attendance were looking back at last year and the bargains that had been presented and kicking themselves for not buying them."

The conference took place on Friday (April 23) at the New Orleans Sheraton. It is an annual showcase for the small- and mid-cap companies that are followed by the student analysts of Freeman's Burkenroad Reports equities research program, which in its 14-year history also has become a barometer of sorts for the regional economy.

Ricchiuti says the central message was thatdespite what you might hear on Fox Newsthe economy is poised to come back in a big way.

"Our keynote speaker, Jim Paulsen, chief investment strategist with Wells Capital, talked about how people are missing the fact that this is a powerful V-shaped recovery," Ricchiuti says. "He said we basically talked ourselves into this problem. It wasn't the 10 percent of people who lost their jobs. It was the 90 percent of people that still had jobs who weren't spending because they were getting ready for the Great Depression."

More than 500 people attended this year's event, including about 175 investment professionals. Ricchiuti says one of the most encouraging developments is that companies attending the conference are starting to use it for recruiting. This year three students got jobs or internships at the session.