U.S. Navy ships off the coast of Burma pulled up their anchors and crews threw up their collective hands in frustration last Wednesday (June 4). The Navy's pullout was due to the Burmese regime's continuing refusal to allow foreign assistance for the roughly 2.4 million people devastated by Cyclone Nargis on May 3. This is just the most recent abuse in a pattern of neglect and oppression by that nation's ruling military junta, says Jeffrey Stacey, assistant professor in the Tulane Department of Political Science. 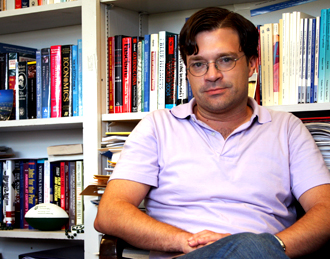 Jeffrey Stacey, an assistant professor of political science, says the death toll in Burma is probably much higher than the state-run media in that country admits. (Photo by Ryan Rivet)

According to Stacey, the ruling junta, which calls itself the State Peace and Development Council, has recently feared an invasion by U.S. forces and this has led to the abandonment of the people.

“You would hope at a time like this, under crisis conditions, the world would have more success getting access,” Stacey says. “Unfortunately, it's been weeks since the regime promised aid workers could get in and only a trickle of them have. The death toll is surely astonishing.”

Stacey says the regime, which now calls the nation Myanmar, is reporting a death toll of more than 100,000 people, but he believes it is much higher than that.

Of the 2.4 million people affected by the cyclone, Stacey says there has been no access to about 1 million of them. “We can't even predict [the death toll]. The regime says 134,000, but that's not even close. It could be a million people.”

He adds that the regime is now evicting people from aid camps inside the country's borders.

“Now they're actually closing down camps that have existed in monastery schools and places where private citizens have set up private camps,” Stacey says. “The regime has come and pushed people out because they don't want any place for people to gather and forge dissent. It's an ongoing brutalization of people who have already been brutalized by Mother Nature.”

He believes the best chance for a multinational response would be intervention by nations with which Burma does business.

“There are no allies of Burma outside of China and, to a certain extent, India. Those relationships are driven by the rich resources Burma possesses,” Stacey says. “What we really need is help from China.”

While Stacey says the future for the Burmese people remains bleak, there may be a slim silver lining around the cloud of oppression.

“The ripple effects are not going to be positive in the short term,” Stacey says. “However, there's hope that somehow some cracks will appear and the dissidents will be able to get a toehold. Sometimes, calamities are the key to change.”

Stacey says he fears that Americans already are forgetting about the Burmese people, and he hopes their plight can remain in the news, especially considering that residents of the Gulf Coast experienced a similar situation, albeit to a lesser extent.

“It should remind Americans about the whole botched recovery here.”

Stacey wrote a chapter on Burma, which appears in Strategies for Democratic Change: Assessing the Global Response (2006).