New Orleans experienced an unprecedented influx of young professionals in the wake of Hurricane Katrina, but the challenge now, civic leaders say, is how to keep these talented 20- and 30-somethings in New Orleans. Tulane MBA student Ishaneka Williams came up with one idea to help accomplish that goal and earned a $200,000 prize package for her effort. 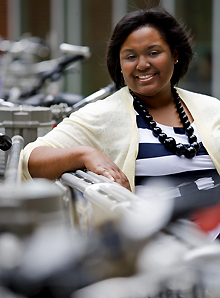 Williams was the grand prizewinner in the recent 504ward Business Competition, which challenged entrepreneurs to develop business proposals to retain and engage 23- to 35-year-olds in the city. The competition, sponsored by the Idea Village and 504ward, a local collaborative effort, offered the winning venture $100,000 in startup cash and $100,000 worth of business services and resources.

Williams and partner Lavonzell Nicholson earned the prize for Play NOLA, a recreational sports league that will combine activities like volleyball, basketball and kickball with social networking opportunities for young professionals.

She says Play NOLA is modeled after similar programs in cities such as San Diego, Washington, D.C., and Chicago, where the Chicago Sports and Social Club is one of the largest such organizations. Play NOLA plans to generate revenues through fees charged to league participants and through corporate sponsorships.

Among the special events planned for Play NOLA's launch this fall are a scavenger hunt and a “lock-and-key” networking party, in which attendees are asked to find the person in attendance whose lock matches his or her key.

Williams wasn't the only Tulane MBA to shine in the competition. Three of the five business proposals selected as finalists were submitted by current Tulane MBA students and a fourth was submitted by a pair of 2008 graduates. Will Donaldson, scheduled to graduate next month with his MBA from the Freeman School of Business, so impressed 504ward organizer Leslie Jacobs with his plan to provide affordable office space to young entrepreneurs that she created a second-place prize of $25,000 just for his proposal. 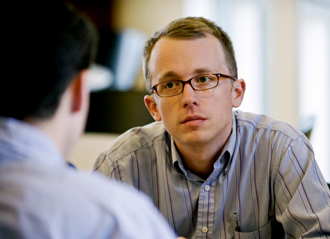 Will Donaldson impressed organizers of the competition with his plan to provide affordable office space to young entrepreneurs. He won a second-place prize of $25,000 just for his proposal. (Photo by Jackson Hill)

“We're trying to make a place that will nurture entrepreneurs,” Donaldson says of his venture, Launch Pad, which offers office space in the Intellectual Property building on Magazine Street, where cutting-edge tenants already include the Idea Village, iSeatz.com, TurboSquid and Carrollton Technology Partners. “When you're working out of your bedroom, you don't get that community, you don't get that culture of entrepreneurship you need that fosters a real business.”

John Elstrott isn't surprised that Tulane MBAs dominated the competition. Social entrepreneurship  creating businesses with a social purpose beyond profits  has become a strength of the Freeman School in recent years, and a growing number of students are interested in creating and working for businesses that meet pressing social needs.

“I think we're attracting that kind of student to Tulane in general,” says Elstrott, executive director of the Levy-Rosenblum Institute for Entrepreneurship.

“They see business not only as a way to fill a need and make a profit but as a way to address an environmental or social issue. It's something we're trying to work more into the curriculum, and it's something our faculty have a strong interest in.”