C-USA Women's Hoops Converge on Avron B. Fogelman Arena in the Devlin Fieldhouse

They're coming to the Tulane campus in droves  tigers and mustangs, eagles and cougars, pirates and miners, a hurricane and even a thundering herd. For the first time in a decade, Tulane is hosting the Conference USA Women's Basketball Championship, awaiting the arrival of 12 teams and their fans for the games that take place on Thursday through Sunday (March 5-8) in Avron B. Fogelman Arena in the Devlin Fieldhouse. 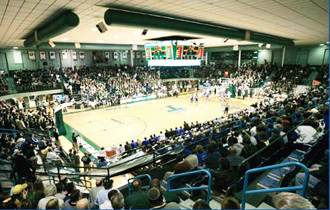 Avron B. Fogelman Arena in the Devlin Fieldhouse will be the center of women's basketball action for the Conference USA Championship starting on Thursday (March 5). (Photo from Conference USA)

Eleven games are on the docket for the single-elimination tournament, from Thursday's first-round action for the eight teams seeded at the bottom, to Friday's (March 6) games with the top four seeds added into the mix. Saturday (March 7) brings the semifinal games, and the championship game is on Sunday (March 8).

Tulane students and faculty and staff members have free seats to all the action.

“As the tournament's host institution, we also have the pleasure of making all the great matchups, intrigue and excitement of this annual tourney free to Tulane students, faculty and staff,” says Tulane President Scott Cowen. Green Wave fans are especially welcome to the opening game for head coach Lisa Stockton's Tulane team, which will play at 5:30 p.m. on Thursday against the University of Tulsa.

The Green Wave, in the middle of the C-USA standings with a 9-7 conference record, 17-13 overall, is sixth seed in the tournament.

“All the schools are excited about coming to New Orleans for the tournament,” says Maria T. Ochoa Woods, senior associate athletics director at Tulane and senor woman administrator, who also is tournament director.

That's a big job, but she's not doing it alone.

“Our whole department is working on it,” Woods adds. “Everyone in athletics is involved. From the athletic training room to marketing to the business office, everyone has a hand in it.”

Teams will start arriving on the Tulane campus on Wednesday (March 4) for practice sessions at the Reily Student Recreation Center. As Thursday's games approach, the uptown campus community can expect an influx of student-athletes, mascots, bands, cheerleaders, media and fans from across the Gulf Coast and from Oklahoma to West Virginia.

Joining the fans for the noon games on Thursday and Friday will be several hundred 5th- through 8th-graders from New Orleans area schools. Woods adds, “We will have Tulane student-athletes there, and other schools will have their basketball players come to mingle with the kids and talk to them about college and athletics, and the importance of that.”

They will be playing for one big prize: winning the conference championship and an automatic bid to the NCAA postseason basketball tournament.

For Tulane, there's another prize at stake as well  national recognition. CBS College Sports will televise the semifinal games to a national audience on Saturday, while Sunday's championship goes live on ESPN2.

“It's a great opportunity,” Woods points out. She invites the Tulane community to take advantage of the opportunity, as well. “Come out to watch some exciting basketball.”