Within the pages of its more than 2,000 cookbooks, the Newcomb College Culinary History Collection holds a wealth of history including the once macabre past of the king cake, a beloved symbol of the Carnival season. 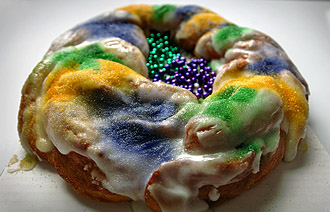 Sprinkled with purple, green and gold sugar, the traditional king cake is a beloved symbol of the Carnival season in New Orleans. (Photo by Paula Burch-Celentano)

Housed in the Nadine Vorhoff Library in the Newcomb College Center for Research on Women, the culinary collection's Louisiana section is brimful of French and Creole cookbooks, several “best gumbo” recipes and history of the king cake.

The oval-shaped pastry always contains a trinket of some sort, but the meaning associated with the person who finds the trinket has changed. At one time, finding the trinket would signify a person's approaching death. In European pagan rituals, the person who found the hidden coin in a king cake was “treated like a king” for a year and then sacrificed. The blood of the sacrificed “king” was returned to the soil to ensure a successful harvest.

When French settlers brought the tradition to Louisiana, the trinket hidden inside the cake continued as a source of finding a “king,” only now, that lucky person would reign over a Carnival ball instead of facing death. Records indicate that beans, coins, ceramic figurines and other charms have been baked into king cakes.

Today, the most common trinket in a New Orleans king cake is an inch-tall plastic baby doll. Finding the plastic baby in your slice of cake typically signifies an obligation to provide the next king cake a tradition that continues cyclically until Mardi Gras day.

Despite changes in the cake's implications, much has remained the same in its ingredients. Recipes in the cookbook collection that date back to the early 1900s are nearly identical to those written 100 years later. Recipes for king cake call for the usual pastry ingredients such as flour, eggs, sugar and butter, but the subtle differences in the confectionary delight  more like a sweet egg bread than a typical cake  appear with the adoption of fruit-flavored filling and glazed icing, in addition to granulated sugar dyed the traditional Mardi Gras colors of purple, green and gold.

Susan Tucker, curator of books and records for the Newcomb College Center for Research on Women, has nurtured the cookbook collection, first assembled in the early 1990s, into the current scholarly resource that it is today. The collection is located in Caroline Richardson Hall on the uptown campus and is open Monday through Thursday from 9 a.m. until 7 p.m. and Friday from 9 a.m. until 5 p.m. Access to the collection also is available by appointment. For information contact Tucker at 504-865-5762.

King cake season in New Orleans begins on Jan. 6 each year to commemorate the Christian holiday of Epiphany and concludes on Mardi Gras (Feb. 24 this year).