Ellen DeGeneres is excited about her upcoming Commencement address at Tulane University and she can't help Twittering about it. Transforming a portion of the Gibson Quad into an impromptu stage on Wednesday (April 22), she used Twitter messages to round up Tulane students. An associate producer of her hit television show was stationed on the quad with a video camera and live feed to DeGeneres in California, giving out prizes to students who came running. 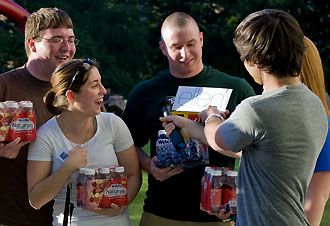 The Twitter event aired on Thursday (April 23) on “The Ellen DeGeneres Show.” The show's host, a New Orleans native, is using the Twitter social media site to create buzz about her engagement as Commencement speaker in New Orleans on May 16. DeGeneres has more than a million followers on her Twitter feed.

The Tulane Tweets from DeGeneres began on April 14, when she wrote, “If you're a student at Tulane, follow my Tweets for some surprises. If you go to another university, you might wanna transfer to Tulane!” Then, at 4:22 p.m. on Wednesday, the excitement began in earnest with this message from the comedian: “Tulane Students: Bring a six pack and your school I.D. to the Red Freckle Sculpture! Go Now!” The Tweet included a photo of the specific sculpture on the Gibson Quad.

Stationed on the quad was Aaron Pinkston, field associate producer for “The Ellen DeGeneres Show.” As he waited, Pinkston said, “This is the first time Ellen's trying something like this, using Twitter, out with the laptop and camera. It will be live to tape. We have lots to give away.”

Bowlby and his friends were heading to dinner when the Tweet came in. They grabbed six-packs of grape juice “and we all just sprinted to the statue. I just happened to be the first person to get there.”

Though it was founded about three years ago, Twitter is gaining steam lately. It is a free social networking and micro-blogging service that enables users to post Tweets up to 140 characters in length on the Internet.

To help explain it all, on April 17 Oprah Winfrey sent out her first Tweet and had the actor Ashton Kutcher and Evan Williams, Twitter CEO, on her television show. Kutcher, who this month beat CNN's Twitter feed in the race for a million followers, said, “I believe that we're at a place now with social media where one person's voice can be as powerful as an entire news network.” He uses Twitter to promote causes such as Malaria No More.

Many others are finding that Twitter is a useful tool to post news. Among the Tulane-affiliated Twitter feeds are the Office of Public Relations, Tulane Technology Services, Tulane Law School, Undergraduate Student Government, the Newcomb College Center for Research on Women and the Newcomb Art Gallery.

Michele White, assistant professor in the Tulane Department of Communication who teaches Internet and new media studies, says Twitter invites inquiry on the depth of our engagement with the Internet and everyday use of technology.

White says new media have shifted the kinds of voices being expressed, but she questions whether everyone has an equal opportunity to be heard. “I think that some new people have entered the social sphere by utilizing these media, but they're few, compared to stars and corporations that have a profit motivation.”