Campus Heats Up for Orientation

If you're expecting the month of June to be hot, humid and quiet on the Tulane University uptown campus, you're right on the weather prediction but wrong about the rest. Far from being in the doldrums, Tulane is bustling with summer orientation for more than 1,000 new students. 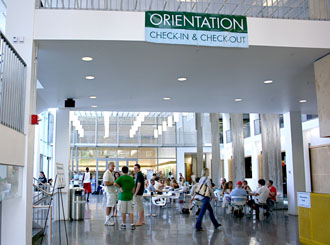 Visiting first-year students and parents crowd the Lavin-Bernick Center on the uptown campus. Seven sessions of Summer Orientation are planned during June. (Photos by Tricia Travis)

And you can count another 500 or so sweating moms and dads who are trekking to information sessions, the bookstore and residence halls as they help their students with that all-important transition to college life.

It's the second year for June orientation sessions on campus, which traditionally were held in late August. Last year's three inaugural June sessions brought in 600 incoming first-year students, eager to get their start at Tulane. This year, that number should more than double, with seven two-day sessions of 200 students each.

Penny Wyatt, director of the Office of Orientation and Student Transitions, took a quick break for a telephone interview in the middle of her first session, held June 4â“5.

“We have over 1,000 students registered now and we are still getting registrations every day,” she says. With six more sessions ahead through the month of June, up to 1,400 students will be able to participate. “We hope to get as many of them through as possible.”

For every 200 students in each session, about 100 parents also arrive on campus, touring facilities and gathering information about student dining and living accommodations, money matters, health and wellness resources, hurricane preparedness and security issues, as well as attending the essential session, “Parenting Today's College Student.” 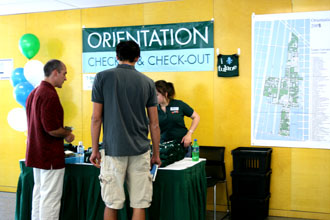 Signing in when they arrive, a father and new student get ready to learn more about the Tulane campus. Students can register for classes during orientation, while parents learn about campus services.

For the recent high school graduates, Summer Orientation is all about making connections with the campus and with each other.

“One of the prime benefits of coming (to orientation) is that they actually get face time with academic advisers and can register while they're here,” says Wyatt, who works within the Division of Student Affairs. “Starting July 1 they can register online but if they come in June they get the opportunity for more support.”

The newest Tulane students also meet upper-class students who serve as mentors, as well as make friends with classmates before they return in August. Fall Welcome Week, including residence hall move-in, begins Aug. 23 for new students, and classes start Aug. 27.

Instead of being anxious all summer about the fall semester, students who attend Summer Orientation are better prepared, Wyatt adds.

“It helps them spend more of their summer anticipating arriving at Tulane with more concrete information and knowledge about who their friends will be, what the campus looks like and who they can go to for questions, before they even get here.”

During the first session last week, one student commented, “Everybody smiles here.”

“That's what we need them to feel  welcome, and like a person, not a number,” Wyatt says. “The personal connection means a whole lot.”