When the Rev. Jamie Washington addresses audiences of students like those at Tulane, he probably blows a few minds. It's not that his message regarding diversity, mutual respect and social justice are necessarily contentious or perplexing. Rather, says Washington, students hearing his message are for the first time occupying both the physical and psychic space to really take on the message. 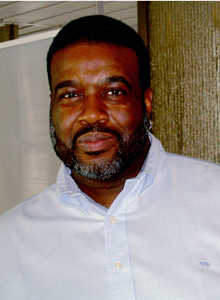 The Rev. Jamie Washington sees the university as a "critical space" for students to begin asking fundamental questions regarding their roles in society. (Photo by Nick Marinello)

"I see lots of college students who, across, race, gender, class and sexual orientation, have not engaged in the question," says Washington, who delivered the 11th annual Diversity Convocation address on Wednesday (Sept. 30), sponsored annually by the Tulane Office of Multicultural Affairs, and led a workshop for administrators.

That question, essentially, is "why do I hold the beliefs that I hold?" With students, Washington seems more concerned with questions than answers.

"Sometimes we start with the statement, 'liberty and justice for all,'" Washington says in an interview during his visit. "What does that mean? How is that a lived value for you?"

Many young people have only their lived experience to draw upon, says Washington. For instance: "Well, everyone around me was poor, but I didn't think about how that was a justice issue. That was the way I grew up."

Or perhaps, a young woman or man wants to introduce someone to his or her parents, but knows they won't approve of the person. Manifesting the mind-set of many young adults, Washington says, "I don't know if I agree with that, but my mom and dad are too important for me to even risk it, so I don't even go there."

With its diversity of people and mission for creating knowledge, the university offers a "critical space for the questions to begin to be asked," says Washington.

He is founder of the Washington Counseling Group and regular lecturer on topics of multiculturalism and diversity.