But Can I Carry on My Coconut?

Only in New Orleans do airport checkpoints display instructions on how to expedite the security process for travelers carrying rubber-tipped spears, painted Zulu coconuts and packaged king cakes. Keith Amacker, director the homeland security studies program in the Tulane School of Continuing Studies, says a courtesy such as this is part of the U.S. Department of Homeland Security's effort to maintain a balance between commerce and security. 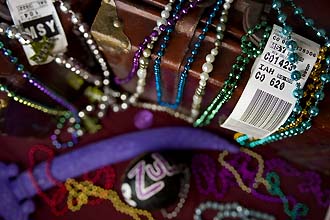 It's a New Orleans thing  Mardi Gras revelers at screening checkpoints in Armstrong International Airport will find special instructions on getting their prized parade treasures such as Zulu coconuts through security. (Photo by Paula Burch-Celentano)

“There is no way to fully secure Mardi Gras and maintain people's expectation of freedom of movement,” says Amacker. “The reality is that commerce will trump security except in extreme cases.”

As airport security weighs the value of passenger safety against the commercial benefit of having happy passengers, the challenges in screening Carnival keepsakes are a minimal consideration.

“There's really nothing sexy or exciting about the Zulu coconut,” says Amacker. “It's just like a baseball or anything else you can carry on. It can go through the X-ray and they can tell if there's something inside.”

As for the New Orleans king cake, Amacker says it's no different from any other food item that travelers are allowed to carry on board. Rubber-tipped spears are similarly regarded  once they have been screened, they are considered no threat to safety.

The posted statements in Armstrong International Airport as well as crowd control methods are a result of years of experience by local first responders as well as the gathering, analysis and dissemination of intelligence from the federal level down to the collection of information from on-scene officials.

Amacker says that security during events with large crowds could always be more stringent, but authorities typically are reluctant to impose security measures that would constrain festivities. The scope of Carnival makes it both fiscally and operationally impossible to protect the public from every likely scenario. In New Orleans, he says, the legality of public drinking and 24-hour revelry along parade routes add unique dimension to security concerns that New Orleans officials deal with through the use of threat assessments based on intelligence analysis.

Parades outside of New Orleans such as the Tournament of Roses Parade in California and the Macy's Thanksgiving Day Parade in New York do not permit the throwing of items from floats because of safety considerations. Prohibiting riders from throwing trinkets in New Orleans would not only go against tradition but also would eliminate one of the charming elements of Carnival that attracts tourists.

Amacker says visitors should not be fearful along parade routes, as the city's first responders have a long track record of keeping crowds safe. Many of these first responders, he adds, are students in Tulane's homeland security studies program.

The homeland security program is designed to meet the growing need for leaders in the fields of emergency preparedness, domestic terrorism, U.S. border security and disaster management. The program currently offers a 120-credit-hour bachelor's degree, an 18-credit-hour homeland security minor and a 24-credit-hour post-baccalaureate degree.