Can You Hear Us Now?

It's gotten easier to learn about life as a graduate student at Tulane's A. B. Freeman School of Business. The Tulane MBA Blog (tulanemba.org) relaunched this semester with six mobile bloggers who can update photos, video and content to the site straight from their smart phones, no matter where they are. The goal is to provide an instantaneous, behind-the-scenes look at life at Freeman from several different students' perspectives as they go about their daily lives. 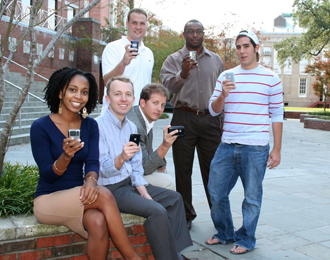 “We can take pictures with an iPhone and upload them immediately to the blog,” says Will Donaldson, site editor and second-year MBA student. “That's brand new. I don't know of any other business schools that are doing this.”

The site features entries on the school's job-hunting center, advice for juggling classes as a new student and notices about campus speakers and lectures as well as lighter-side topics like classroom Frisbee, cultural events and even an ode to the virtues of New Orleans mild fall weather.

“We genuinely want people to know what it's like to be here,” says Price, who is pursuing a dual master's of business and global management degree. “Even though we are in the same program, we are intrigued by different things and pursing different things. You'll see that in the blog.”

Joel Yarmon started the Tulane MBA Blog in 2006 to let outsiders know how the school and New Orleans were doing post-Katrina. It evolved into a key selling point to prospective students who wanted to hear a student's perspective about the school. Donaldson himself was an avid reader before enrolling at Tulane.

“It was a fundamental part of my decision-making process before coming here,” he says. “What we have learned after talking to people is that people read the blog most between when they have been accepted to Tulane and when they have to make a decision between us and other schools.”

The admission department promotes several official Freeman websites via Google and Yahoo, but the MBA Blog gets about 120 percent more traffic, says Bill Sandefer, director of graduate admission at the Freeman School.

“This really covers the difficult point where students have learned about the school from the administration, but want a look into the inside of the machine. Our students are honest about their experience, and we get a lot of mileage from prospective students about the realistic perspective,” he says.

Sandefer's department bought smart phones for the bloggers to support the relaunch. While half have iPhones, the rest have Blackberries, which allow them to post videos.