As night falls on St. Charles Avenue on Wednesday (Nov. 5), students from Tulane and Loyola universities as well as neighborhood residents will march by candlelight during the annual Take Back the Night event to raise awareness about sexual assault. 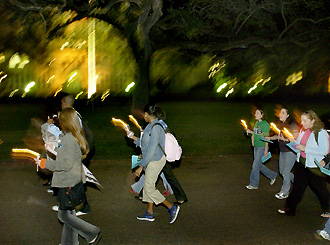 This year marks the 17th time that Tulane and Loyola universities have marched by candlelight in the Take Back the Night event to raise awareness about sexual and domestic violence. (Photo by Paula Burch-Celentano)

The opening ceremony will begin at 5:30 p.m. in the horseshoe drive on the front lawn of Loyola's campus. Participants will march in front of both campuses onto Broadway Street before arriving at Rogers Memorial Chapel on Tulane's campus, where participants will have an opportunity to speak during an open-mike session.

The goal of the rally is to unify the community and denounce sexual and domestic violence. According to the U.S. Department of Justice, a woman is sexually assaulted somewhere in America every 2.5 minutes. The American Association of University Women also reports that 20 to 25 percent of women will be raped during their college career, and often by someone they know. However, 65 percent of attacks are unreported.

Organizers hope that Take Back the Night can help break the silence by allowing speakers to publicly affirm their transition from victim to survivor.

“Take Back the Night is always a positive contribution to the community, empowering people to talk openly about a difficult subject and to give support to one another,” says Cordelia Heaney, director of Newcomb Student Programs. “The Tulane student committee has worked exceptionally hard this year on the event.”

This year marks the 17th Take Back the Night event co-hosted by Tulane and Loyola. Newcomb Student Programs and various student groups at both universities have been instrumental in planning the event. Given the current climate, they are encouraging everyone in the university community to support the march.

“I just want people to show up. It's important to show solidarity,” says Megan Charneco, a Tulane senior and member of the planning committee. “It's about being part of a community. It's not only for victims.”

In conjunction with the event, the planning committee will raffle gift baskets to raise money for three local organizations: Crescent House, the SANE nurse program and the Metropolitan Center for Women and Children. Raffle tickets will be on sale through Wednesday from noon until 2 p.m. in the Lavin-Bernick Center, as well as during the event.

In addition, students will receive a free T-shirt for pledging not to contribute to bystander behavior related to sexual assault.

Charneco adds, “It has always been an important issue on campus. If it hasn't happened to you, it has happened to one of your friends or to someone you know. Male, female, it doesn't really matter. It can happen to anyone. You can help stop it.”